Why Do So Many Republicans Believe Trump's Lies? 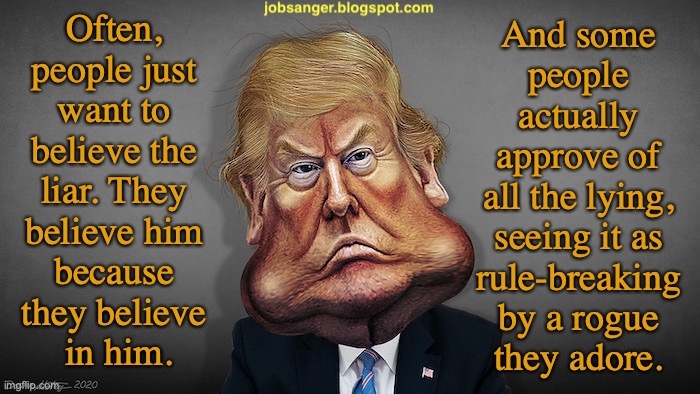 During his four years in office, Donald Trump. told over 30,000 documented lies. And after he was defeated in the 2020 election (by over 7 million votes), he told what was perhaps his biggest lie -- that he had actually won the election, but Biden was inaugurated because of massive voter fraud. These lies were easily disprovable, including the "big lie" about his election loss. That brings up a valid question. Why do so many Republicans believe Trump's lies?

Ruth Ben-Ghiat tries to answer that question. Here is part of what she wrote:

Propaganda gains traction through repetition and saturation. The same message is disseminated through multiple channels and institutions, with small variations, to lead a maximum number of individuals “in the same direction, but differently,” as the sociologist Jacques Ellul wrote. . . .

Seeing the same messages over and over can lead some to tune out, but it may also boost confidence that the content is truthful. Repetition can lead to familiarity, which increases acceptance -- especially when the state has silenced alternate voices.

Today’s autocrats, many of whom hold elections and govern even with a pocket of opposition, are more dependent than ever on manipulating information about their own competency and the threats presented by their enemies. Social media helps them by accelerating processes of message repetition and multiplication. Followers share falsehoods and also make them “fresh” for their friends and contacts through the memes and slogans they create. . . .

The same can be said of the tsunami of disinformation unleashed by Donald Trump. The 5.9 million individual Facebook ads his 2016 campaign ran often purveyed the same messages with small variations. Falsehoods about the links between crime and immigration, a frequent theme, prepared his public to believe later Facebook ads that warned of the "national emergency" created by immigrant "invasions," (the word was used in 2,000 ads between January and August 2019 alone). Reinforced at his rallies, on talk radio, and by Fox News, they were part of the more than 30,000 false and misleading claims he made during his presidency.

Trump’s focus on immigration enabled another classic propaganda technique: telling lies that seem convincing because they build on a grain of truth, in this case the fact that large numbers of foreigners do indeed cross the border. Omitting vital information such as when they arrived and with what motives is part of the ruse. So, some lies are accepted because they seem to confirm what people think they know.

Moreover, once people bond with the leader, they may be inclined to dismiss any evidence that conflicts with his claims, or overlook contradictions in his messages. They believe him because they believe in him. Or, in an interesting twist, they know he is lying, but they decide that they don’t care: better him than his enemy (who, as they have been taught to believe, lies even more). And some people actually approve of all the lying, seeing it as rule-breaking by a rogue they adore.