It's Time To Make Manchin Defend His Indefensible Position 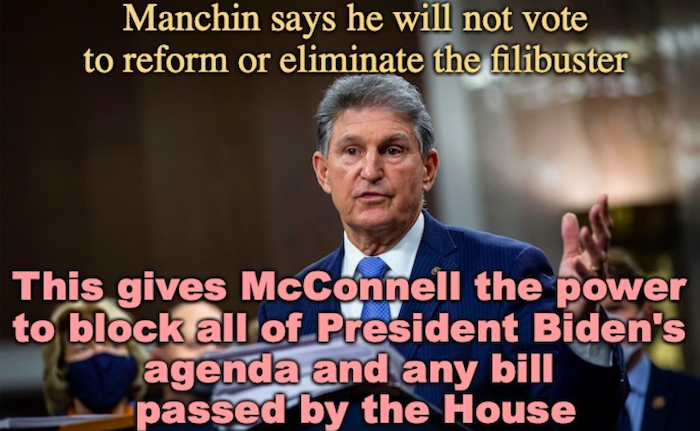 Joe Manchin has come out solidly against either reforming or eliminating the Senate filibuster. This gives Mitch McConnell the power to block any bill passed by the House, or any proposal by President Biden. And McConnell has already publicly declared he wants to block 100% of what Biden tries to do. Chuck Schumer may be the Senate Majority Leader, but Manchin's ridiculous stance makes sure that the real power in the Senate belongs to Minority Leader McConnell.

It's time for the public to make Manchin defend his stance (which I believe is indefensible). Manchin has said he believes the filibuster protects and promotes bipartisan speech in the Senate. He's not living in the real world. The filibuster, as Republicans are using it, actually prevents any bipartisan debate from happening.

Here is some of what Jennifer Rubin has to say about Manchin in The Washington Post:

It’s time for Manchin to put up or share blame for Republicans’ subversion of democracy. Let him come up with 10 Republicans for H.R. 4 and for a slimmed down H.R. 1. Let him find four more Republicans to support the Jan. 6 commission. If he cannot, then his thesis that the filibuster promotes debate and makes way for compromise collapses and his role in promoting the tyranny of the minority is laid bare.

Manchin insisted that he will not “weaken or eliminate” the filibuster. He should be compelled to spell out what reforms he would accept. Is requiring Republicans to hold the floor (i.e., demanding a talking filibuster) “weakening” the rule? It is well past the time to start pressuring Manchin to answer some basic questions: If the filibuster is simply a means of thwarting any reasonable legislation, why is it worth preserving? What if the integrity of our democracy is at stake?

Manchin’s bland platitudes suggest he prefers stalemate to taking hard votes. The status quo leaves him with latitude to make holier-than-thou pronouncements to decry both sides.

Elevating the filibuster to the sine qua non of our constitutional system is absurd. It is not in the Constitution. It protects no constitutional principle. It does not constitute a check or balance on the other branches as, for example, a veto override or the Senate’s advise and consent power on nominees. It does not protect minority rights when it is used to thwart voting rights protection for disfavored minorities.

Moreover, the republic survived previous changes to the filibuster, such as reducing cloture to 60 votes, eliminating the filibuster for executive branch nominees and carving out budget reconciliation. There is no reason to assume another modification — one to ensure the fundamental right to vote — would be any more harmful.

What are Democrats to do with someone so seemingly irrational and obstinate as Manchin?

First, Democrats should compel Republicans to filibuster again and again the bills Manchin himself thinks are entirely reasonable. Bring up H.R. 4. Put the Jan. 6 commission back on the floor. After 5 or 6 of these rounds, Manchin’s bipartisan fetish may subside.

Second, Manchin’s Democratic colleagues have a right to demand he present compromise legislation that has 10 Republicans. What magic formula is he aware of that has evaded others? Where are four more Republicans in addition to the six who would support the Jan. 6 commission?

And finally, voters and voting rights activists need to confront Manchin civilly and peacefully, but with unrelenting demands for him to justify his position. An array of interest groups hurt by Republican obstruction and assaults on voting rights — e.g., organized labor, seniors, the disabled community — must turn up the heat. Most of all, Capitol Hill police and other law enforcement officials must demand passage of the Jan. 6 commission — or Manchin’s agreement to push it through with less than 60 votes. They and the widows of law enforcement personnel killed from the Jan. 6 events need to be omnipresent and unrelenting.

The time for Manchin’s excuse-mongering is over. It is time to demonstrate his bipartisan notions are more than fantasy. And if he cannot, he needs to choose his legacy: He either ushers in democracy’s demise or refuses to allow Republicans to dismantle democracy before our eyes. That’s certainly the only thing for which he’ll be remembered.