The Insurrection Is Not Over And It's Still Very Dangerous 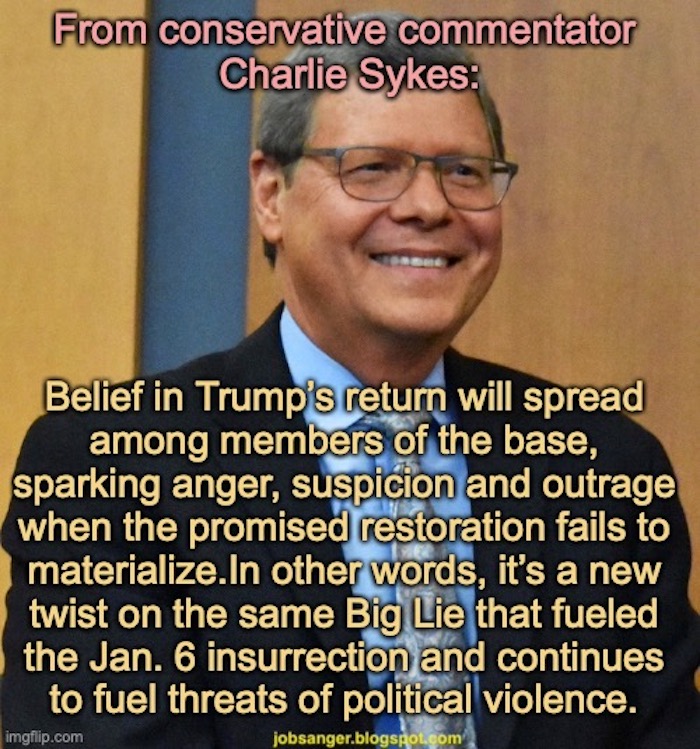 I seldom agree with conservative commentator Charlie Sykes, but he is right about this. The insurrection is still happening, and it continues to pose a danger of political violence. We must not ignore it. Here is some of what Sykes had to say at MSNBC.com:

I’m afraid this is even worse than it looks.

The National Review is now confirming that Donald J. Trump, the former president of the United States (and probable Republican nominee in 2024) does indeed believe quite genuinely that he — along with former Sens. David Perdue and Martha McSally — will be “reinstated” later this summer.

That, of course, is not going to happen. It is, in fact, weapons-grade lunacy to imagine that it is even possible.

But Trump’s embrace of the story shows how the right’s doom loop of craziness works — and how it is accelerating narratives that began in the fevered imaginations of his hardcore true believers.

But Trump’s embrace of the story shows how the right’s doom loop of craziness works — and how it is accelerating narratives that began in the fevered imaginations of his hardcore true believers.

Delegitimizing our democracy is now central to Trump’s agenda and his hopes for a political comeback. And polls suggest that his lies about the election have influenced tens of millions of voters.

A Reuters/Ipsos poll from May found that a quarter of Americans — and 53 percent of Republicans — actually believe Trump is the "true president" of the United States.

In this alternative reality, it’s only a small step to believe their “true president” might really return.

The idea of just such a magical, extra-constitutional Trumpian reinstatement was floated just last week at a QAnon conference. MAGA lawyer Sidney Powell said, without providing any evidence or details, that Trump “can simply be reinstated, but a new inauguration date is set, and Biden is told to move out of the White House, and President Trump should be moved back in.”

The same idea has been amplified by Mike Lindell, the MyPillow guy, whose baseless charges of election fraud bought him a $1.3 billion defamation suit from Dominion Voting Systems.

For months, Lindell has been insisting that he would present evidence that would overturn Joe Biden’s victory. . . .

This is delusional. But now, the former president appears to believe it. Or at least pretends to.

Days after Trump’s former national security adviser Michael Flynn suggested the possibility of a military coup (he has since denied doing so despite it being captured on tape), New York Times reporter Maggie Haberman tweeted that “Trump has been telling a number of people he’s in contact with that he expects he will get reinstated by August.”

The Daily Beast heard the same thing: “In the past few weeks, two people close to Trump told The Daily Beast, the ex-president had begun increasingly quizzing confidants about a potential August return to power. What’s more, he claimed that a lot of ‘highly respected’ people — who Trump did not name — have been saying it’s possible.”. . .

It’s impossible to know whether Trump genuinely believes that he can move back into the White House this summer. But that’s not the point; the story works for him as long as other people believe it.

So don’t be surprised if this notion gathers momentum in the right’s feedback loop, especially if Trump continues to stoke false hopes. . . .

It won’t take much for the idea to get traction in the MAGAverse — or for belief in the righteousness of the Trumpian restoration to become a new litmus test for GOP loyalty. . . .

Meanwhile, belief in Trump’s return will spread among members of the base, sparking anger, suspicion and outrage when the promised restoration fails to materialize.

In other words, it’s a new twist on the same Big Lie that fueled the Jan. 6 insurrection and continues to fuel threats of political violence. That makes it even worse than it looks.