Corporation Are Waging War On Workers - And Winning 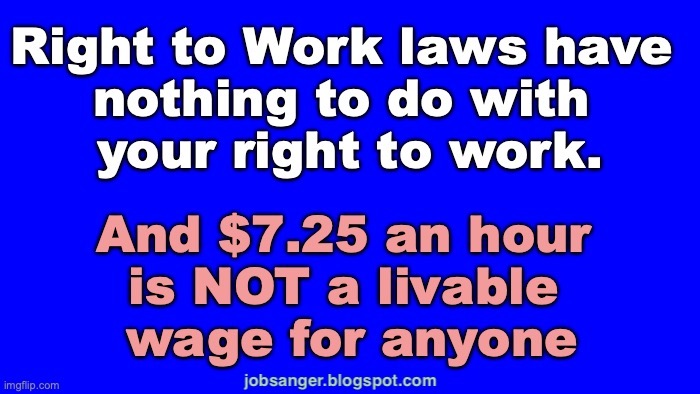 When the Republicans gained enough power (about 1980), they changed the economic policies in this country. Those new policies favored the rich and the corporations, and hurt workers. There has been a virtual war on workers, resulting in stagnant wages and more dangerous workplaces. The minimum wage is no longer a livable wage and labor unions no longer have the power to protect workers. This must change!

The following is what former Labor Secretary Robert Reich has to say about the current untenable situation:

Imagine a world where workers have real power. In this world, workers are paid a living wage, are protected by a strong union, and wield enough political clout to ensure Congress passes pro-worker laws. Corporations can’t treat them like robots and abandon communities to find cheaper labor elsewhere. It is a world of low inequality, where workers have a bigger share of the fruits of their labor.

This world was far from perfect. Black people and women were still second-class citizens. Windows of opportunity were still small or shuttered. That’s why it’s not enough to just go back in time. We must build upon it and expand it.

For the past 40 years, this world has been dismantled. The voice of workers has been steadily drowned out in both the workplace and on the national political stage by the voice of big corporations.

This massive power shift wasn’t the result of “free market forces” but of political choices. Now, it’s time to make the political choice to strengthen the voice of all workers.

Start with one of the biggest sources of worker power: unions. Every worker in America has a legal right to join a union free from interference from their employer – a hard-fought victory that workers shed blood to secure. But corporate America has been busting unions to prevent workers from organizing.

In Bessemer, Alabama, for instance, Amazon used every trick in the anti-union playbook to prevent its predominantly Black workforce from forming the first Amazon union.

Most union-busting tactics are illegal, but the punishment is so laughably small that it’s simply the cost of doing business for a multi-billion dollar company like Amazon.

In addition, 28 states now have so-called “right-to-work” laws on the books, thanks to decades of big business lobbying. These laws ban unions from requiring dues from non-union workers, although non-union workers still benefit from these union contracts. This obviously makes it much harder for workers to unionize.

Corporations are also misclassifying employees as independent contractors and part-time workers, so workers don’t qualify for unemployment insurance, worker’s compensation, or the minimum wage, and don’t have the right to form a union.

And corporations are waging political fights to keep employees off the books: Uber, Lyft, and other gig companies shelled out $200 million to get Proposition 22 passed in California, exempting them from a state labor law cracking down on misclassification.

It’s a vicious cycle: corporations crush their workers to protect corporate bottom lines, then use their enlarged profits to lobby for policies that allow them to keep crushing their workers – preventing workers from having a voice in the workplace and in our democracy.

This vicious cycle began in the 1980s, when corporate raiders ushered in the era of “shareholder capitalism” that prioritized shareholders above the interests of other stakeholders.

They bought up enough shares of stock to gain control of the corporation, and then cut costs by slashing payrolls, busting unions, and abandoning their home communities for cheaper locales – all to maximize share values. The CEO of General Electric at the time, Jack Welch, helped pioneer these moves: in just his first four years as CEO, a full quarter of GE’s workforce was fired.

The Reagan administration helped block legislation to rein in these hostile takeovers, and refused to lift a finger to enforce antitrust laws that could have prevented some of them.

I wish I could report that the Clinton and Obama administrations reformed labor laws to make it harder for corporations to bust unions. But either because Bill Clinton and Barack Obama lacked the political clout to get this done or didn’t want to expend the political capital, the fact is neither president led the way.

The result of these political choices? Corporate profits have soared and wages have stagnated.

But it doesn’t have to be this way. We can turn the tide by making new political choices that restore the voice and centrality of American workers.

The most important is now in front of us: It’s called the Protecting the Right to Organize Act.

Passed in the House in March with bipartisan support, the PRO Act is the toughest labor law reform in a generation.

It prevents misclassification of full-time workers, bans corporations from harassing or intimidating workers who want to form a union, prohibits employers from replacing striking workers with non-union workers, and beefs up penalties for breaking existing labor laws, among other provisions empowering workers.

Beyond the PRO Act, American businesses need to be restructured so workers have a say at every level. At the top, that means a voice on corporate boards. In many European countries, worker representation has been shown to boost wages, skills, and corporate investment in communities.

At the local level, we should make it easier to establish worker-owned cooperatives, which have been shown to increase profits, wages, and worker satisfaction.

And our trade and foreign policy can center on American workers without falling into the kind of xenophobia and nativism Donald Trump promoted.

Reversing 40 years of shareholder capitalism won’t be easy. But remember this: you, the working people of America, outnumber the corporate executives and big investors by a wide margin. Together, you can change the rules, and build a world where workers have real power.