GOP Is An Autocracy & And They Want The Same For Us 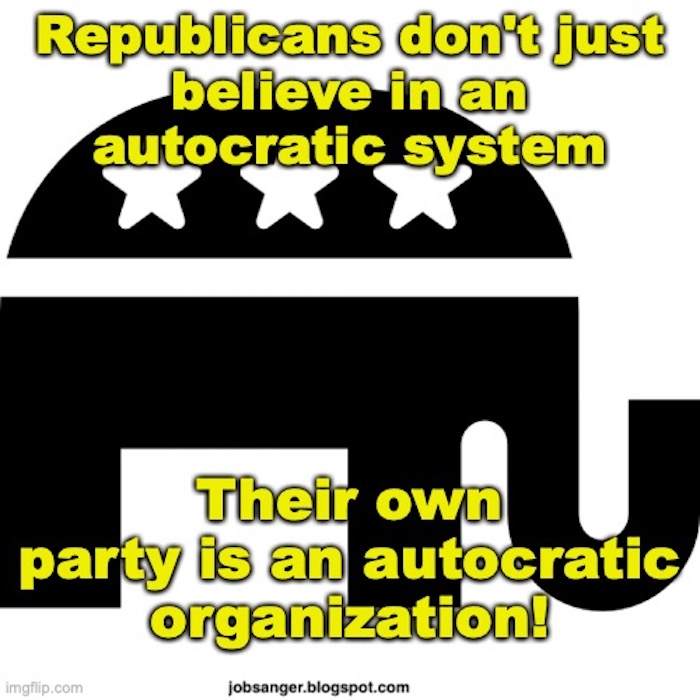 The Republican Party used to be a political party, with conservatives, moderates, and even some liberals -- and those elements combined to make the party's policy, which was carried out by elected officials. That is no longer true. Today's Republican Party has devolved into an autocratic cult of personality, where everything is decided by "Dear Leader".

The following is part of an op-ed about this by Paul Krugman in The New York Times:

“The Mechanisms of Cult Production” compares the behavior of political elites across a wide range of dictatorial regimes, from Caligula’s Rome to the Kim family’s North Korea, and finds striking similarities. Despite vast differences in culture and material circumstances, elites in all such regimes engage in pretty much the same behavior, especially what the paper dubs “loyalty signaling” and “flattery inflation.”

Signaling is a concept originally drawn from economics; it says that people sometimes engage in costly, seemingly pointless behavior as a way to prove that they have attributes others value. For example, new hires at investment banks may work insanely long hours, not because the extra hours are actually productive, but to demonstrate their commitment to feeding the money machine.

In the context of dictatorial regimes, signaling typically involves making absurd claims on behalf of the Leader and his agenda, often including “nauseating displays of loyalty.” If the claims are obvious nonsense and destructive in their effects, if making those claims humiliates the person who makes them, these are features, not bugs. I mean, how does the Leader know if you’re truly loyal unless you’re willing to demonstrate your loyalty by inflicting harm both on others and on your own reputation?

And once this kind of signaling becomes the norm, those trying to prove their loyalty have to go to ever greater extremes to differentiate themselves from the pack. Hence “flattery inflation”: The Leader isn’t just brave and wise, he’s a perfect physical specimen, a brilliant health expert, a Nobel-level economic analyst, and more. The fact that he’s obviously none of these things only enhances the effectiveness of the flattery as a demonstration of loyalty.

Does all of this sound familiar? Of course it does, at least to anyone who has been tracking Fox News or the utterances of political figures like Lindsey Graham or Kevin McCarthy.

Many people, myself included, have declared for years that the G.O.P. is no longer a normal political party. It doesn’t look anything like, say, Dwight Eisenhower’s Republican Party or Germany’s Christian Democrats. But it bears a growing resemblance to the ruling parties of autocratic regimes.

The only unusual thing about the G.O.P.’s wholesale adoption of the Leader Principle is that the party doesn’t have a monopoly on power; in fact, it controls neither Congress nor the White House. Politicians suspected of insufficient loyalty to Donald Trump and Trumpism in general aren’t sent to the gulag. At most, they stand to lose intraparty offices and, possibly, future primaries. Yet such is the timidity of Republican politicians that these mild threats are apparently enough to make many of them behave like Caligula’s courtiers.

Unfortunately, all this loyalty signaling is putting the whole nation at risk. In fact, it will almost surely kill large numbers of Americans in the next few months. . . .

The G.O.P. has become something different, with, as far as I know, no precedent in American history although with many precedents abroad. Republicans have created for themselves a political realm in which costly demonstrations of loyalty transcend considerations of good policy or even basic logic. And all of us may pay the price.