Jan. 6th Attack On The Capitol WAS A Violent Insurrection 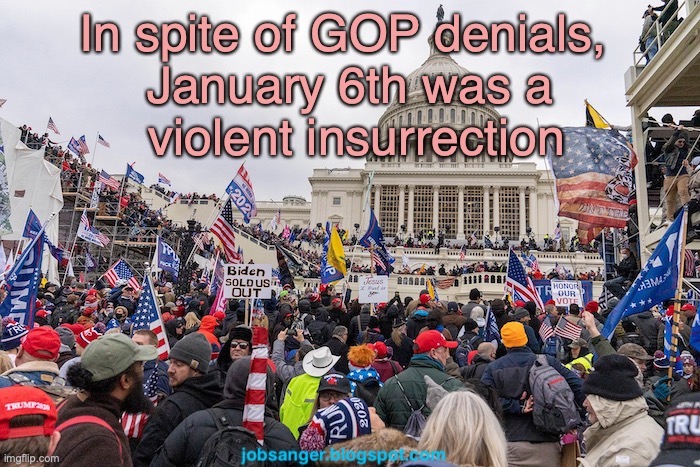 Some of the Republicans in Congress want to deny that the January 6th attack on the Capitol Building was anything but a group of tourists visiting. And nearly all Republicans in Congress have voted to block a committee to investigate the cause of that attack. That's because the attack was a violent insurrection by their own right-wing supporters -- and many of them encouraged and incited the attack.

The following is what the editorial board of The Washington Post has to say about it:

In the six months since the Jan. 6 Capitol attack, former president Donald Trump has played down the violence, even painting the insurrectionists as the victims. But the facts prosecutors have revealed since this national disgrace suggest that the insurrection was actually better planned and more dangerous than it seemed on live television.

The Justice Department announced this week that law enforcement authorities have arrested more than 535 people, an average of about three every day since Jan. 6. The rioters did $1.5 million of damage to the Capitol building. The insurrectionists allegedly assaulted some 140 police officers. So far, authorities have charged 50 people with using a deadly or dangerous weapon or causing serious bodily injury to an officer. But far more appear to have been involved: The FBI is still trying to identify more than 300 people investigators believe committed violent acts, including more than 200 believed to have assaulted police officers. These were not tourists.

Court documents unsealed Thursday, relating to the June 30 arrest of four Florida residents, provided harrowing details of some of these alleged assaults. One of the defendants allegedly “charged the line of police officers and began throwing punches.” Another allegedly stole a police officer’s shield after he pulled the officer down the Capitol steps, then charged into a police line. And another allegedly thrust a flagpole into an officer’s chest, before raising it over his head and apparently striking an officer in the back of his head. The attack resulted in the death of one police officer, and 138 were reported injured.

These are just a few of countless examples of mayhem that have emerged since Jan. 6. Indeed, the alleged violence was not just directed at police. Authorities have arrested six people for assaulting journalists or destroying their equipment.

Prosecutors also argue that the havoc was far from spontaneous, assembling evidence that far-right activists planned for violence, even preparing a “quick reaction force” site. Testimony from alleged participants suggests that members of the Oath Keepers stashed guns in a Virginia hotel, brought paramilitary gear, used military-style formations to assault the Capitol, conducted tactical training meetings in advance of Jan. 6 and moved to erase what they described as “all signal comms about the op” afterward.

Because Republican senators rejected a Jan. 6 commission, some questions about the assault might never be answered definitively, such as exactly what Mr. Trump did and did not do while insurrectionists attacked lawmakers. But prosecutors are showing that this was not some run-of-the-mill riot; it was a violent incursion into the nation’s seat of government conducted by dangerous extremists and encouraged by the president, who asked them to descend on Washington. This should not be another issue for partisan disagreement. No American should minimize or forget the horror of Jan. 6.