Lifting 50% of Children Out Of Poverty Is NOT Good Enough 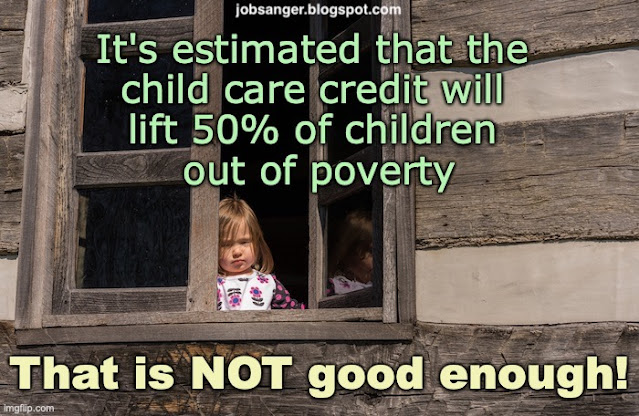 It has been estimated that the payments would likely cut child poverty in half in the United States. That's a good thing. Anytime a child can be lifted out of poverty, it is a good thing. But it's not good enough!

In the United States (the richest nation on Earth), about 1 in every 7 or 8 (depending on how poverty is defined) children lives in poverty. What about the other I in 3.5 or 4 children? Shouldn't the United States be lifting them out of poverty also?

We have the highest poverty rate among children of any developed nation. That should not be! We have the potential to eliminate child poverty. All we need is the political will to do it.

Sadly, the congressional Republicans don't care about this nation's children. They think it's more important to cut taxes on the rich and the corporations (who already pay a lower rate than many in the middle class). And especially in the Senate, they have the ability to filibuster any bill to eliminate child poverty.

We must do better. I don't know if we could actually eliminate all child poverty, but it is a moral imperative that we try to do it.

How? We could start by doing two things. First, raise the minimum wage to a livable wage -- about $15 an hour. Second, Provide decent and affordable child care for workers. These two things would go a long way toward rectifying the situation, and it would have another positive effect -- it would boost the economy as the low-wage workers spend that extra money they earn (and don't have to pay for child care). Each dollar they spend would turn over several times in the economy.

Republican economic policy is a failure. Helping the rich and corporations doesn't boost the economy, because they just hide that money in overseas accounts to avoid paying even more taxes. But Democratic policy boosts the economy. By providing help to the middle class, and especially the poor, their spending is good for everyone (even small and large businesses).

We could boost our economy and virtually eliminate child poverty with some common sense economic policies. But that won't happen until the Republicans are voted out of power.