Religious Right Is Shrinking - & It's Making Them Dangerous 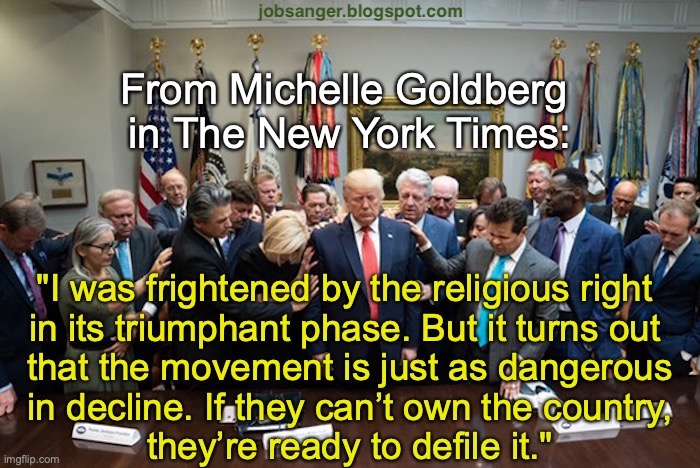 For too long in this country, the religious right (evangelical christians) was the most powerful political force in the United States. That is no longer absolutely true. Their numbers are shrinking. That is both a good and bad thing. It's good because they can no longer force their weird view of religion on all Americans. It's bad because it has made them more dangerous (as we saw on January 6th).

The following is part of a column in The New York Times by Michael Goldberg:

The presidency of George W. Bush may have been the high point of the modern Christian right’s influence in America. White evangelicals were the largest religious faction in the country. “They had a president who claimed to be one of their own, he had a testimony, talked in evangelical terms,” said Robert P. Jones, chief executive of the Public Religion Research Institute and author of the 2016 book “The End of White Christian America.”. . .

Activists imagined a glorious future. “Home-schoolers will be inordinately represented in the highest levels of leadership and power in the next generation,” Ned Ryun, a former Bush speechwriter, said at a 2005 Christian home-schooling convention. Ryun was the director of a group called Generation Joshua, which worked to get home-schooled kids into politics. The name came from the Old Testament. Moses had led the chosen people out of exile, but it was his successor, Joshua, who conquered the Holy Land.

But the evangelicals who thought they were about to take over America were destined for disappointment. On Thursday, P.R.R.I. released startling new polling data showing just how much ground the religious right has lost. P.R.R.I.’s 2020 Census of American Religion, based on a survey of nearly half a million people, shows a precipitous decline in the share of the population identifying as white evangelical, from 23 percent in 2006 to 14.5 percent last year. (As a category, “white evangelicals” isn’t a perfect proxy for the religious right, but the overlap is substantial.) In 2020, as in every year since 2013, the largest religious group in the United States was the religiously unaffiliated.

One of P.R.R.I.’s most surprising findings was that in 2020, there were more white mainline Protestants than white evangelicals. This doesn’t necessarily mean Christians are joining mainline congregations — the survey measures self-identification, not church affiliation. It is, nevertheless, a striking turnabout after years when mainline Protestantism was considered moribund and evangelical Christianity full of dynamism.

In addition to shrinking as a share of the population, white evangelicals were also the oldest religious group in the United States, with a median age of 56. “It’s not just that they are dying off, but it is that they’re losing younger members,” Jones told me. As the group has become older and smaller, Jones said, “a real visceral sense of loss of cultural dominance” has set in.

White evangelicals once saw themselves “as the owners of mainstream American culture and morality and values,” said Jones. Now they are just another subculture.

From this fact derives much of our country’s cultural conflict. It helps explain not just the rise of Donald Trump, but also the growth of QAnon and even the escalating conflagration over critical race theory. “It’s hard to overstate the strength of this feeling, among white evangelicals in particular, of America being a white Christian country,” said Jones. “This sense of ownership of America just runs so deep in white evangelical circles.” The feeling that it’s slipping away has created an atmosphere of rage, resentment and paranoia. . . .

“It’s not unlike a belief in the second coming of Christ,” said Jones. “That at some point God will reorder society and set things right. I think that when a community feels itself in crisis, it does become more susceptible to conspiracy theories and other things that tell them that what they’re experiencing is not ultimately what’s going to happen.”

The fight over critical race theory seems, on the surface, further from theological concerns. There are, obviously, plenty of people who aren’t evangelical who are anti-C.R.T., as well as evangelicals who oppose C.R.T. bans. But the idea that public schools are corrupting children by leading them away from a providential understanding of American history has deep roots in white evangelical culture. And it was the Christian right that pioneered the tactic of trying to take over school boards in response to teachings seen as morally objectionable, whether that meant sex education, “secular humanism” or evolution.

Jones points out that last year, after Trump issued an executive order targeting critical race theory, the presidents of all six seminaries of the Southern Baptist Convention came together to declare C.R.T. “incompatible” with the Baptist faith. Jones, whose latest book is “White Too Long: The Legacy of White Supremacy in American Christianity,” could recall no precedent for such a joint statement. . . .

Then again, white evangelicals probably aren’t wrong to fear that their children are getting away from them. As their numbers have shrunk and as they’ve grown more at odds with younger Americans, said Jones, “that has led to this bigger sense of being under attack, a kind of visceral defensive posture, that we saw President Trump really leveraging.”

I was frightened by the religious right in its triumphant phase. But it turns out that the movement is just as dangerous in decline. Maybe more so. It didn’t take long for the cocky optimism of Generation Joshua to give way to the nihilism of the Jan. 6 insurrectionists. If they can’t own the country, they’re ready to defile it.