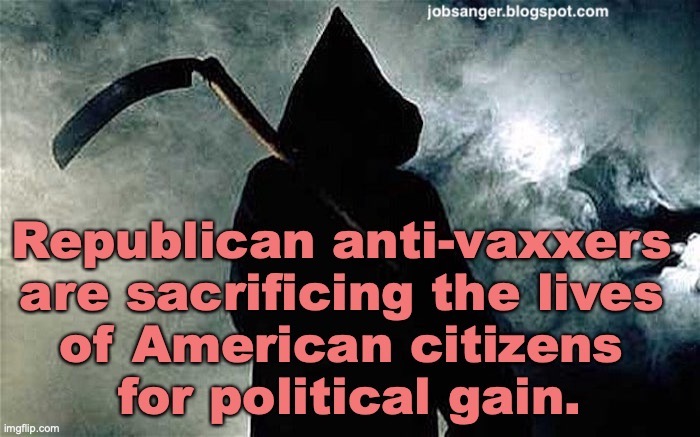 I can understand why some politicians support crazy or irrational policies -- it's because they think it will get them votes (or at least the support of their party's base). But I really don't understand why any politician would support this policy -- a policy to convince voters that they should not be vaccinated. That policy is actually going to make sure more Americans are killed (since only the unvaccinated are currently being killed by COVID-19). And it makes even less sense, when you consider these Republicans are killing off their own voters!

Here's what Michael Gerson had to say about this in The Washington Post:

In this light, the recent outbreak of applause at the Conservative Political Action Conference for the United States’ failure to meet its vaccination target was macabre. Here were political activists — many of whom would call themselves “pro-life” — cheering for the advance of death. How did we get to such a strange, desperate place?

I don’t want to discount the possibility that some people are just badly misinformed. They think the vaccines come with itsy-bitsy tracking chips, or make you magnetic, or render you infertile — all of which are pure rubbish. Ignorance is a form of moral mitigation, but it is still, well, ignorance.

There are also some who oppose vaccination out of a tragically misapplied libertarianism. They somehow think the defense of freedom requires the rejection of sound medical advice from the government. They seek a rarefied form of liberation — liberation from rational rules, from prudent precautions, from scientific reality and from moral responsibility for their neighbors’ well-being. This is the degraded version of a proud tradition: Live free and let someone else die.

But others in conservative media and elected office must know precisely what they’re doing. They’re rational enough to recognize the timeline the rest of us inhabit, on which we desperately needed miraculous vaccines, miraculously got them and expeditiously distributed them to the willing.

In the case of Fox News celebrities in particular, they must know that discouraging vaccination — by exaggerating risks, highlighting unproven alternative therapies and normalizing anti-vaccine voices — will result in additional, unnecessary deaths. This is hard to get my head around. If someone were to pay me as a columnist to argue that cigarette smoking is healthy for children, or to encourage teenagers to take naps on railroad tracks after underage drinking, I don’t think I could make an ethical case for accepting the deal. Should it matter if I belonged to a news network where producing child smokers and trisected teens were institutional policies? Or if one-half of a major political party endorsed such goals? I don’t see why.

Fox News’s conservative anti-vaxxers gain advantages — in viewers and influence — by feeding conspiratorial fears that can kill their viewers. Standing outside politics for a moment, is this really the sum of their ambitions? Is this a reason to get out of bed in the morning? How does someone look in the mirror and say: Today, I will purposely misinform people in ways that increase their risk of hospitalization and death?

But the largest betrayal comes from Republican politicians who feed vaccine skepticism for their own benefit.

It is my predisposition to sympathize with the difficult work of legislators. They are often forced to weigh competing goods in matters of grave consequence. They are sometimes forced to decide whether they will support or oppose putting our armed forces at risk.

This case, however, is very different. No one has forced Sens. Rand Paul (Ky.), Ron Johnson (Wis.), or Ted Cruz (Tex.), Reps. Jim Jordan (Ohio) or Madison Cawthorn (N.C.), or many of their Republican peers to encourage vaccine skepticism, or to slander vaccine promotion as oppression, or to make selfish, destructive health decisions into a new civic rights cause. Yet they have. They are not proposing a realistic, alternative way to defeat a pandemic. They are undermining the only way to defeat a pandemic, because it will endear them to Trump stalwarts.

The health education provided by Republican officials to their supporters has been tragically effective. According to a recent Post-ABC News poll, 86 percent of Democrats have received at least one vaccine dose, while only 45 percent of Republicans have done so. This has put a vast number of additional Republicans in what West Virginia Gov. Jim Justice (R) calls the “death lottery.”

For years, I’ve been saying to myself that GOP politics can’t go lower. I am perpetually wrong. Americans should never forget this moment — or let guilty Republicans forget it. When Republican activists cheered for death at CPAC, they were cheering for disproportionately Republican deaths. When elected Republicans feed doubts about safe, effective vaccines, they are making it more physically dangerous to be a Republican in America.