Right-Wing War Against Vaccinations Will Just Get Uglier 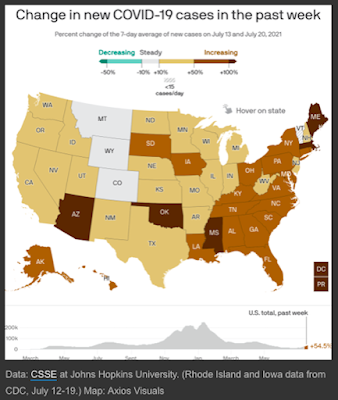 As you can see from this chart, the new cases of COVID-19 is rising in nearly every state in the country.

That is because the Republican right-wingers have been waging a political war against vaccinations. They seem to think that preventing President Biden from getting this country to the point of herd immunity (thus defeating the virus) will somehow benefit them politically.

They are wrong. Only a minority of their own supporters are in the group refusing to be vaccinated, while most Americans are angry over the vaccination opposition.

But the right-wingers presist -- and as Hayes Brown (at MSNBC.com) says, the right-wing war on vaccinations is just likely to get much uglier.

For months now, right-wing politicians and media figures have cast baseless doubt on the efficacy of the Covid-19 vaccines. It's ghoulish and vile — and I'm worried that it's gearing up for an even more dangerous phase.

There's an obvious political slant to this misinformation, a terrible logic that views the Biden administration's vaccination campaign as an impediment to potential Republican electoral victories. Basically, in this thinking, anything President Joe Biden does that's good for the country is bad for the GOP. Ergo, vaccines that would help America safely and fully reopen — not to mention save lives — must be bad.

The anti-vaccine narrative has taken hold among Republican voters, helping keep the vaccination rate in the U.S. at about 59 percent of adults. Forty-seven percent of Republicans said they weren't likely to get vaccinated, a recent Washington Post-ABC News poll found.

Rather than help push his followers to get their shots, former President Donald Trump joined the cavalcade of denialists over the weekend. In a statement dripping with pique, he linked mistrust in the administration's vaccination push to his own lies about the election:

While Trump is, as ever, willing to say the quiet part out loud, others have twisted themselves into ideological knots to justify their vaccine skepticism. Many, like Fox News omni-troll Tucker Carlson, have tried to frame vaccine concerns as a civil liberties issue. When the Biden administration announced its plan to have volunteers and health workers go door to door to spread the good word about vaccines, Carlson and his fellow Fox host Laura Ingraham absolutely freaked out. Carlson said the initiative was trying to "force people to take medicine they don't want or need." Ingraham likewise said the campaign was "creepy stuff.". . .

And then there are the folks at OANN, who framed the door-to-door campaign as a ploy by "political operatives" sent to "the homes of people who refuse to take an experimental COVID-19 vaccine." Last week the media site also ran a whole segment "fact-checking" the vaccines, claiming that over 9,000 people have died as a result of being vaccinated. (That is not the case at all, according to the Centers for Disease Control and Prevention.)

All of this is terrible, but it's missing an important piece of the conspiracy puzzle. Eventually, these theorists are going to need a scapegoat: someone to blame for the inescapable fact that people are still dying from Covid-19. As NBC News reported Monday, "five of the top six states with the highest daily average cases over the past two weeks have below-average vaccination rates and voted for Trump last fall.". . .

But the anti-Covid vaccine movement will struggle to explain away the unvaccinated Americans who are overwhelming hospital systems again. It can't tell people whose loved ones have gotten sick and died after refusing the vaccines that the inoculation was to blame. And there's no leap that I can think of, logical or not, that convincingly makes the case that Biden is more responsible for these deaths than the people who are discouraging vaccinations.

Which leaves me worried about what happens when this movement does find a scapegoat. In the early days of the pandemic, even after prevention efforts like social distancing and masking were known to work, Asian Americans were the targets of choice. The violence sparked by that racist attempt to divert attention from America's lackluster pandemic response has yet to fully abate.

There has to be someone who can be blamed for these hundreds of daily deaths. I'm sure someone will turn up sooner or later on Carlson's show — and I'm not looking forward to finding out who the mob has chosen.