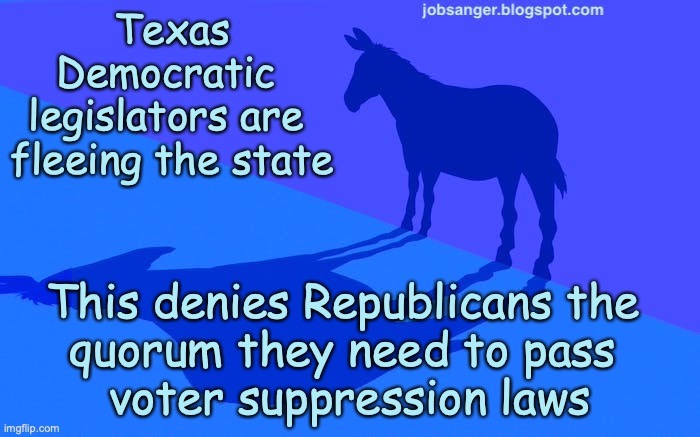 The Texas legislature is getting in a special session right now. The purpose of that special session is to pass several GOP voter suppression laws, which the Republicans failed to get done in their regular legislative session.

The Democratic legislators have tried what they could to stop the odious new laws. And they have offered numerous amendments to those laws -- none of which were accepted by the Republican majority. That only leaves the Democrats with one option -- leave the state. Their absence will mean the laws could not be passed, because according to Texas law a quorum of 2/3 must be present to pass a law. The Democrats don't have enough legislators to block the law, but they have enough to prevent a quorum.

They are taking that option. Rumor has it they are going to the District of Columbia (although some may opt for a blue state).

Texas law allows the Republican legislators to ask the Texas Rangers to find and arrest them, and bring them back to the legislature (where they would be locked in the building until the law is passed). Will they try to do that? They might. But there is also the question of whether the Rangers have the authority to arrest them out of state. And whether D.C. or blue state courts would allow them to be extradited back to Texas.

The odds are against the Democratic legislators, but I give them credit. They are doing everything they can to protect the right to vote in Texas.

It will be interesting to see how this all comes out.