The Joint Chiefs Were Determined To Prevent A Trump Coup 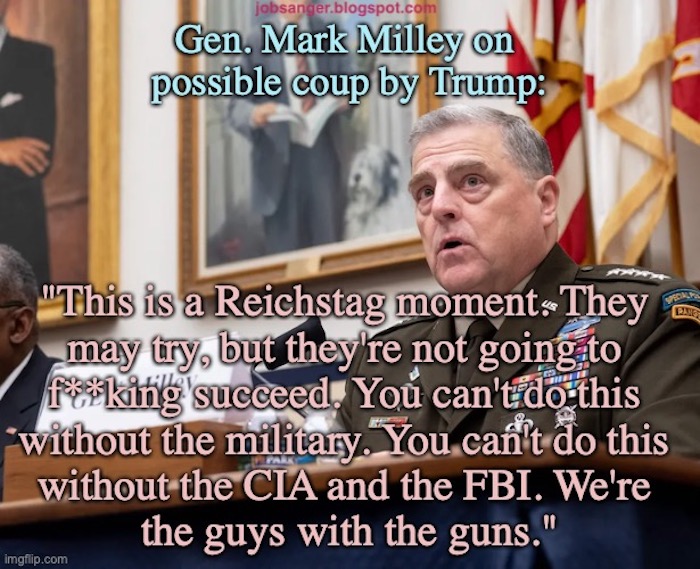 Many of us were fearful before President Biden was officially inaugurated that Donald Trump would try to use the military to stage a coup and stay in power. We weren't the only ones. The top military officials for the United States had that same fear, and they were determined to prevent it.

The following is just a part of an excellent article Jamie Gangel, Jeremy Herb, Marshall Cohen, and Elizabeth Stuart at CNN.com:

The top US military officer, Chairman of the Joint Chiefs Gen. Mark Milley, was so shaken that then-President Donald Trump and his allies might attempt a coup or take other dangerous or illegal measures after the November election that Milley and other top officials informally planned for different ways to stop Trump, according to excerpts of an upcoming book obtained by CNN.

The book, from Pulitzer Prize-winning Washington Post reporters Carol Leonnig and Philip Rucker, describes how Milley and the other Joint Chiefs discussed a plan to resign, one-by-one, rather than carry out orders from Trump that they considered to be illegal, dangerous or ill-advised.

"It was a kind of Saturday Night Massacre in reverse," Leonnig and Rucker write. . . .

The book recounts how for the first time in modern US history the nation's top military officer, whose role is to advise the president, was preparing for a showdown with the commander in chief because he feared a coup attempt after Trump lost the November election.

The authors explain Milley's growing concerns that personnel moves that put Trump acolytes in positions of power at the Pentagon after the November 2020 election, including the firing of Defense Secretary Mark Esper and the resignation of Attorney General William Barr, were the sign of something sinister to come.

Milley spoke to friends, lawmakers and colleagues about the threat of a coup, and the Joint Chiefs chairman felt he had to be "on guard" for what might come.

In the days leading up to January 6, Leonnig and Rucker write, Milley was worried about Trump's call to action. "Milley told his staff that he believed Trump was stoking unrest, possibly in hopes of an excuse to invoke the Insurrection Act and call out the military."

Milley viewed Trump as "the classic authoritarian leader with nothing to lose," the authors write, and he saw parallels between Adolf Hitler's rhetoric as a victim and savior and Trump's false claims of election fraud.

"This is a Reichstag moment," Milley told aides, according to the book. "The gospel of the Führer."

Ahead of a November pro-Trump "Million MAGA March" to protest the election results, Milley told aides he feared it "could be the modern American equivalent of 'brownshirts in the streets,'" referring to the pro-Nazi militia that fueled Hitler's rise to power. . . .

After January 6, Milley participated in a drill with military and law enforcement leaders to prepare for the January 20 inauguration of President Joe Biden. Washington was on lockdown over fears that far-right groups like the Proud Boys might try to violently disrupt the transfer of power.

Milley told a group of senior leaders, "Here's the deal, guys: These guys are Nazis, they're boogaloo boys, they're Proud Boys. These are the same people we fought in World War II. We're going to put a ring of steel around this city and the Nazis aren't getting in.". . .

Milley expressed his relief in the moments after Biden was sworn in, speaking to the Obamas sitting on the inauguration stage. Michelle Obama asked Milley how he was feeling.
"No one has a bigger smile today than I do," Milley said, according to Leonnig and Rucker. "You can't see it under my mask, but I do."
Posted by Ted McLaughlin at 12:02 AM