There Are Far Too Many Police Killings In The United States 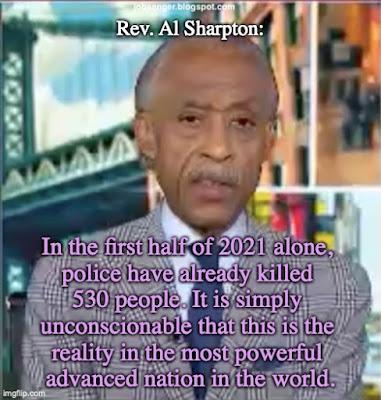 There are far too many police killings in this country -- of people of all races. After the unjustified police murder of George Floyd, many thought that something would finally be done. That police reform would finally happen. But so far, Congress has done nothing!

The following is part of an op-ed by Rev. Al Sharpton at MSNBC.com:

For nearly four decades, I have stood alongside grieving families, preached at funerals, led marches against police brutality and fought on behalf of people who are voiceless. It never gets any easier when you receive that phone call about another death at the hands of law enforcement or hear the pain in the voice of a parent or grandparent who now has to bury a child or loved one because of police misconduct.

Recently, I received one such call about a 17-year-old teenager in Arkansas named Hunter Brittain. Young Hunter was unarmed and holding only a bottle of antifreeze for his car when he was shot three times by a sheriff’s deputy. I have demanded justice for countless other victims of police brutality, and we demand justice now for Hunter and his family.

Hunter was white, a fact that may surprise people familiar with the cases I have represented in the past. But in this case, as in all the cases I have taken, it isn’t just about Black or white; it’s about what’s right and wrong. We don’t just stand up for one race; we come for what is right, period.

On June 23, Hunter’s life was cut short when a Lonoke County sheriff’s deputy fatally shot him during a traffic stop. According to his family members, he went to place a large blue plastic bottle of antifreeze behind a tire to prevent his car from rolling backward as it was having mechanical problems. It’s at that point that the officer, Michael Davis, shot the 17-year-old three times.

Conveniently, this officer didn’t have his body camera turned on, so no footage exists of the horrific shooting. The family said they are still awaiting answers and are seeking accountability for a young man who had his entire life ahead of him. . . .

It is long past time that we end qualified immunity, which shields police officers from being held personally accountable in civil lawsuits.

Ending this practice is one of the components of the George Floyd Justice in Policing Act, which passed the House in March but has since stalled in the Senate because of Republican objections. The bill also bans chokeholds and no-knock warrants, requires the use of bodycams and so much more. This act must pass and become law so there are national standards that protect all of us from bad officers.

In the first half of 2021 alone, police have already killed 530 people, according to the research collective Mapping Police Violence. As a result, there have only been nine days this year where police did not kill someone. In 2020, 27 percent of people killed by police were Black, despite being only 13 percent of the population. It is simply unconscionable that this is the reality in the most powerful advanced nation in the world. The horrific death of young Hunter Brittain sadly shows us that no one is safe until there is true police reform and accountability. . . .

As I stated at his service, Hunter had a bottle of antifreeze, and perhaps that is the message: We must unfreeze hearts because for too long we have been frozen in our own race, our own class, our own comfort levels. He is no longer with us in the physical sense, but his spirit is calling us to get out of our frozen place and unite, stand together, march together and fight together for true justice for all.