Time To End The Double Standard In Uniforms For Athletes 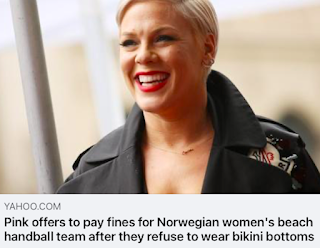 You may have already heard about the fine levels against the women's beach handball team for Norway. Instead if wearing the mandated bikini bottoms, they chose to wear shorts, and each player on the team was fined 150 euros (for a team total of 1500 euros) by the European Handball Federation.

Singer Pink said she would pay all the fines. Good for her. But why must the women wear bikini bottoms? The men play in shorts -- why can't the women? Are they trying to sell sex or a sport?

This is not the only sport requiring sexy uniforms for women, but not for men -- and it's time for it to stop in all sports.

I am an avid fan of both men's and women's sports, and I don't watch them because of the kind of uniforms they wear in either. I only care about how well the sport is being played, and who wins. I think most other sports fans are the same. Athletes should be allowed to wear any kind of uniform they want (as long as it doesn't give them an unfair advantage over the other athletes).

The following is from Ivanka Saric and Ina Fried at Axios.com:

Female Olympians in Tokyo are rejecting the uniforms that have long defined their sports, highlighting a double standard that exists how women dress in competition vs. men.

Between the lines: The German Gymnastics Federation said the new uniforms were meant to push back "against sexualization in gymnastics."

State of play: Double standards between male and female athletes often come down to aesthetics and convention, rather than necessity.