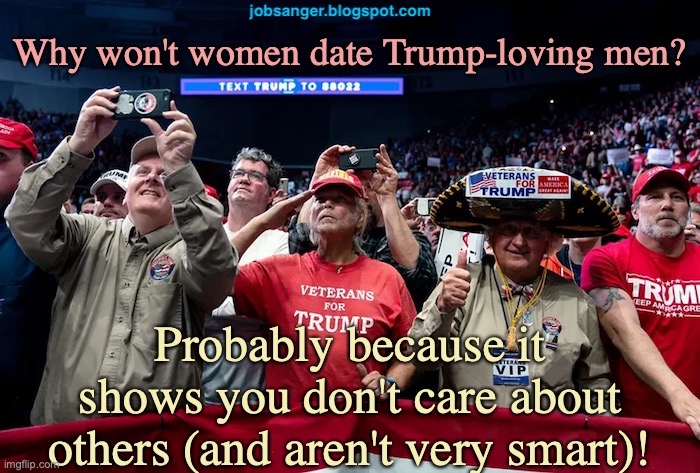 The reason Trump-loving men can't find a date is something right-wingers are trying to answer. But they ignore the obvious answer -- that being a Trump-lover exposes many negative things about a person, especially the inability to truly care about other people. They tend to blame women instead.

The following is most of an excellent article on this by Andi Zeisler at NBCnews.com:

The occasional Republican might bravely step forward to draw the line at violent insurrection, but on balance conservatives have ceased articulating actual policy platforms in favor of simply adopting the cartoon villainy that animates their leader. It’s a turbulent time. Yet the key question that seems to be keeping many conservatives up at night is: Why don’t people want to date us?

In 2018, Washingtonian magazine reported on young D.C. conservatives who found that working in the Trump White House or for right-wing media outlets were dating-app dealbreakers. A 2017 piece in The Federalist argued that dating sites that allow for “associative mating” — also known as “selecting partners with interests and beliefs in common” — were in fact the reason Trump was elected in the first place. The New York Times’s Ross Douthat applauded the British economist Robin Hanson for advocating the “redistribution” of sex as a remedy for the murderous misogyny of incels.

The newest entry in this pantheon of conservative lonely hearts comes from Eric Kaufmann, whose piece this week in the National Review, “Political Discrimination as Civil-Rights Struggle,” argues that college women’s disinterest in dating Trump supporters doesn’t just hurt their feelings, but is in fact discrimination. This, Kaufmann maintains, is evidence of a “progressive authoritarianism” that’s compelling “young elite Americans” to be turned off by “conservatives' resistance to racial, gender, and sexual progressivism.”

It’s true: A growing number of Americans are increasingly intolerant of racial, gender, and sexual intolerance. Bigotry just isn’t sexy, and few people seek partners who don’t acknowledge their full humanity. But for Kaufmann, the fault lies not with the people who hold noxious views, but with those who have the temerity to not want to get naked with them. His solution? If you can’t date, legislate. After identifying right-wing conservatives as a “small and declining political minority in elite institutions,” he calls for institutional remedies to prioritize this minority, writing, “Those on the right, along with freedom-minded allies on the left, will have to use government and the law to limit institutional autonomy just enough to protect individual freedoms.”

It’s worth asking why Kaufmann, along with the aforementioned conservative men, care about a lack of romantic interest in Trump supporters. Men on the internet have long charged that progressive, feminist Democratic voters are ugly, unlovable harpies, simultaneously sexless and slutty, and destined to die alone with their cats. Meanwhile, MAGA men regularly crow about studies indicating that conservative women are hotter than those on the other side. If these guys are happy to date within their own political affiliation, that’s great, right? Wrong. The problem, per Kaufmann, is that a majority of young women have the nerve to not want to date the men who don’t want to date them. How dare they?

Kaufmann is somewhat creative in interpreting the studies he cites. But even taken at face value, their findings aren’t truth bombs. Most women, not just educated “elite” ones, want to date people they actually like and who actually like them back. And it’s hardly surprising that people whose very existence has always been politicized tend to want to share their hearts, bodies, and futures with partners who hold similar values; with whom they can thrive in love and partnership. Pretending that pre-Trump daters didn’t have political preferences and standards is disingenuous. Framing it as a civil-rights issue is just creepy. There’s a term for people who force others into sexual and emotional intimacy, and it’s not “marriage material.”

Such arguments don’t just read like “Handmaid’s Tale” fan fiction; they also directly contradict the stated principles of American conservatism itself. Educated women not wanting to date Trump supporters, for instance, is a solid example of the free market that conservatives hold so dear. These guys are a demonstrably shoddy product: They mistake being loud for being factual; they conflate guns and masculinity; they’re incurious and dismissive of anything they don’t understand; and, like the twice-impeached Florida retiree they revere, they’re not great at taking no for an answer. If women reject them and the market corrects in response, everything is working exactly how conservatives believe it should. . . .

What enrages these men isn’t the lack of opportunities for romantic discussions of marginal tax rates and defunding Medicare; it’s that women can choose what they do with their bodies, and with whom they do it. “Progressive authoritarianism” is simply a new name for the same kinds of fearmongering rhetoric that already drives conservative positions on abortion access, birth control, childcare, gender identity, and more, and no amount of academic jargon and economic bloviating can conceal it.

Most of us learn early in life that you can’t bully someone into liking you, that not all desire is reciprocal, and that we can all learn from self-examination. Those who apparently haven’t should keep this important dating tip in mind: When a critical mass of people find your values regressive, your political beliefs inhumane, and your political hero repellent, it’s not them. It’s you.