U.S. Should NOT Interfere In The Politics Of Haiti Or Cuba 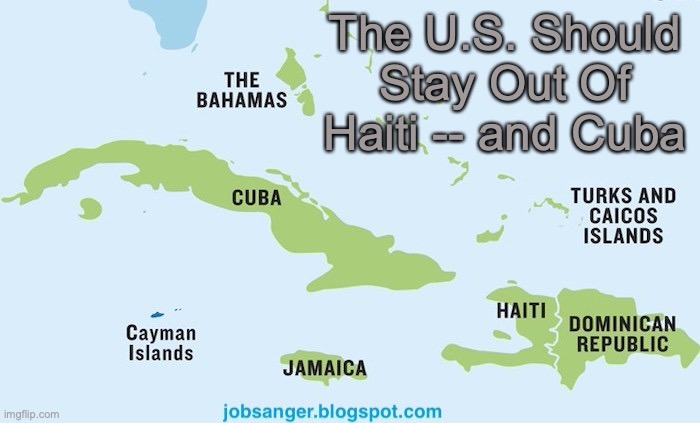 The nation of Haiti has some serious political problems at present. Their leader was assassinated in a coup attempt and there is much unrest and violence over what is to be done (who will replace him). The current leader is barely hanging on, and has asked for U.S. troops to be sent -- and some in this country agree with that.

There are also some serious demonstrations going on in Cuba -- thanks to a food and vaccine shortage and a repressive government. Some in the United States (especially among Cuban immigrants) want the U.S. to take action against the Cuban government.

The U.S. government should not do either. It should stay out of the politics of both nations, and let the people of those countries decide their future. And the U.S. should definitely not send troops or take military action to either country.

Frankly, the United States does not have a good record of trying to cause regime change in other countries. We have either made the situation worse, or failed to get anything accomplished. We need to learn from our mistakes.

The nation of Iran had a democratically-elected government, but our CIA caused that government to fall (because they were going to nationalize their oil reserves). We installed the Shah in power, and that country suffered many years under his dictatorial rule. When he was finally ousted, he was replaced by the religious regime of the Ayatollah.

The nation of Chile had a democratically-elected government, but our intelligence services help the military stage a coup (because they were going to nationalize the copper mines). That nation then suffered many years under the dictatorship of General Pinochet (who simply murdered his opponents). Thankfully, the people of Chile finally ousted Pinochet (with no help from us) and re-established their democracy.

When the French left Vietnam, we sent our own troops to prop up a corrupt South Vietnamese government (because we were afraid the communist North Vietnamese would take over). We accomplished nothing but the deaths of thousands of people on both sides of the conflict -- and then withdrew when it became apparent that we could not "win".

We then made the same mistake in Afghanistan. We went to war with the Taliban government there because we wanted to capture or kill Osama bin-Laden. But when that became difficult, we changed our goal and decided to establish a "democracy" in that country. The government we established was corrupt, and after twenty years of war it became obvious that, like in Vietnam, we could not "win".

Frankly, with our tack record, we should not get involved in either Haiti or Cuba. We would likely just make things worse and cause a lot of unnecessary deaths.