Warren Calls For A Wealth Tax On The Richest Americans 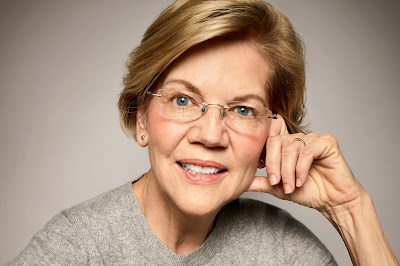 Currently, there is a large gap in wealth between the richest Americans and the rest of the country -- a gap as large as it was in the 1920's.

And with the rich getting much richer in the current economy while workers struggle just to stay even, that gap is growing much larger with each passing week. We are becoming a nation of "haves" and "have-nots" -- surpassing even some third world countries in inequality.

We must change the economic rules in this country, so they no longer favor the rich to the detriment of everyone else. One of the ideas to help narrow the wealth gap has been proposed by Senator Elizabeth Warren (D-Massachusetts). It is a wealth tax on the richest Americans.

Here is how she describes it in an e-mail she sent to progressives:

This week, Jeff Bezos -- the wealthiest person in the world -- launched into space.

Meanwhile, in America today, over half of the country lives paycheck to paycheck. Nearly 43 million people are saddled with student loan debt, preventing many from buying a home or starting a family. And for those who do start a family, the astronomical costs of child care are squeezing budgets even harder, forcing millions of young parents -- especially women -- out of the workforce.

Our economy has worked better and better for the rich and powerful, and worse and worse for everyone else. How did we get here? We got here in part because billionaires like Jeff Bezos and giant corporations like Amazon have spent years avoiding paying their fair share in taxes. They’ve lobbied for loopholes, cooked up schemes with the best accountants money can buy, and hollowed out our government’s ability to invest in our people, from roads and bridges to child care and higher education.

Our tax system is rigged for those at the top. That’s why I’m fighting every day in the Senate to pass a wealth tax and level the playing field for working families. The PCCC has been right alongside me organizing grassroots supporters for a wealth tax since the beginning. We've got to keep pushing.

Look, I get it. Jeff Bezos can do what he wants with his money. But to use his enormous wealth to go to space after years of systematically paying less than his fair share of taxes is a punch in the gut to the tens of millions of Americans who struggle to make ends meet.

The worst part? Under our broken tax system, it’s completely legal.That’s because billionaires like Elon Musk, Jeff Bezos, and Mike Bloomberg don’t make their fortunes through income like working families do. Their wealth comes from assets -- like stock portfolios, art collections, and super-yachts. In fact, Jeff Bezos reportedly paid $0 in federal income taxes in 2007 and 2011 -- despite already being a multi-billionaire.

My wealth tax bill would place a two-cent per dollar tax on people with a net worth above $50 million -- a few cents more for the billionaires. That means Jeff Bezos would pay $5.4 billion of his estimated net worth of $181 billion -- and he’d still have more than enough money for his space missions and super-yachts.

Thanks for being a part of this,