44% of Adults Can't Name The 3 Branches Of Government 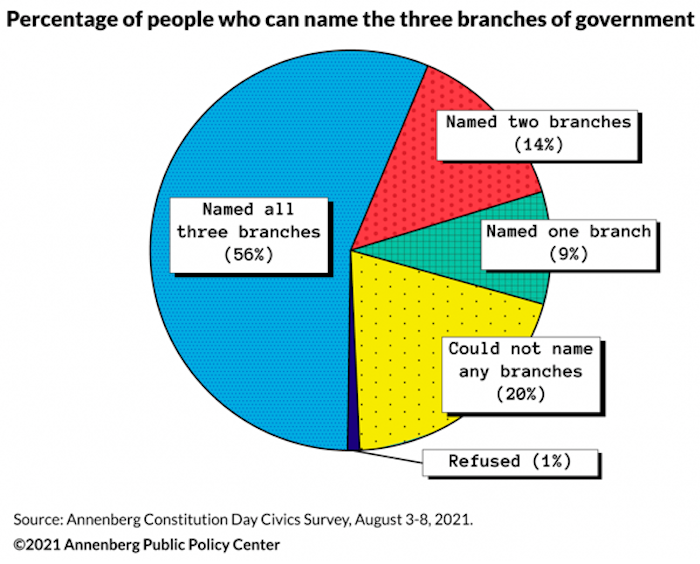 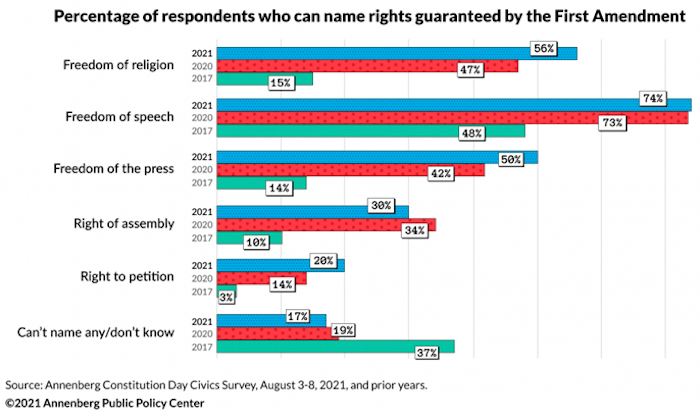 The charts above are from The Annenberg Constitution Day Survey. This survey is done yearly and released on Constitution Day (September 17th). This year the survey was done between August 3rd and 8th of a national sample of 1,001 adults, and had a 3.8 point margin of error.
Respondents were asked if they could name the three branches of the U.S. government. About 56% were able to do that. Sadly, that means 44% were NOT able to name the three branches of our government. This is very disappointing. Every American should be able to do that. It doesn't take a college degree to know that. It is one of the basics taught in every high school civics class.
And most didn't do too much better when asked to name the rights guaranteed in the First Amendment to the Constitution. Majorities could name freedom of speech (74%) and freedom of religion (56%), and only half could name freedom of the press (50%).
But only 30% could name the right to assemble and only 20% could name the right to petition the government. And 17% couldn't name any of the First Amendment rights.
But most troubling of all was when the respondents were asked if arresting the January 6th protesters violated their constitutional rights. About 49% said their arrest violated their constitutional rights (and 49% said it did not).
It looks like a lot of people need to reread the Constitution, and its First Amendment. That amendment guarantees the right to peaceably assemble. It does not extend to violent actions (like attacking the police) or breaking into a building (in this instance, our Capitol Building).
I suspect the loudest whiners about their rights are those who could not even name those rights -- or the three branches of government.
Posted by Ted McLaughlin at 12:06 AM