Abbott's Record Is An Assault On Texas Women And Children 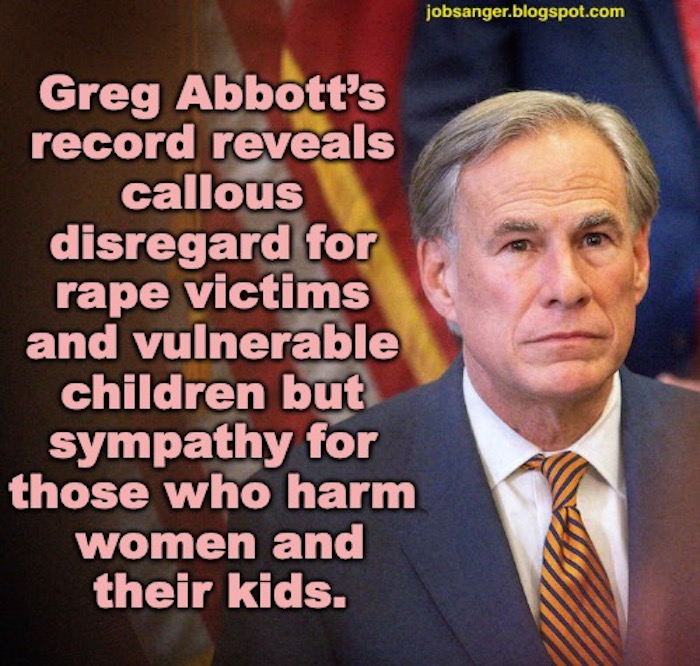 Greg Abbott will try to tell you that he has a good record on protecting vulnerable Texans. But his record shows just the opposite. He has a record of harming more than helping the vulnerable -- especially women and children.

Here, from the Lone Star Project, is a brief review of his terrible record regarding women and children:

In a 1996 case, Texas Supreme Court Justice Greg Abbott denied a woman with repressed memories from suing her father for repeated sexual abusebecause she filed four months after the statute of limitations expired. Justice Priscilla Owens, a Republican, disagreed with Abbott and argued that this case of sexual assault should merit an exception. The Republican-controlled Texas Legislature even broke with Abbott when they changed the law to extend the statute of limitations in repressed memory cases.

Later, in 1998, Abbott turned his back on Kristi Read—a married mother with children who was brutally raped in her home by a convicted sex-offender working as a door-to-door vacuum cleaner salesman. Read sued the Kirby Vacuum Company because it failed to adequately check the rapist’s criminal background which would have revealed his history of sexual assault. The conservative court voted 6-3 in favor of Mrs. Read, but Abbott voted against her, writing that the company “owed no duty” to the rape victim.

In 1999, Abbott ruled against another rape victim, Angela Holder, for suing the company that owned a dangerous Houston parking garage where she was repeatedly assaulted. Evidence revealed that 190 violent crimes were committed near the garage in just the two years before Holder was raped. Abbott acknowledged the garage was unsafe but argued that the company could not have “reasonably foreseen” that a rape would occur at the structure. Abbott’s ruling made it harder for all Texas rape victims to hold property owners accountable.

In 2014, Abbott proudly campaigned closely with the musician Ted Nugent, who notoriously admitted to sexually abusing underage girls and manipulating their parents into giving him access to their daughters. Nugent was so close to Abbott that he called the then-attorney general his “blood brother.”

In 2015, Abbott promised to overhaul Texas Child Protective Services (CPS), but an investigation by the Dallas Morning News revealed that Abbott made things worse. More Texas children died of abuse and neglect AFTER Abbott got involved. Public documents revealed gruesome child deaths, relentless caseworker turnover, and dangerous case backlogs. The consensus is that many deaths could have been prevented had Abbott’s team acted swiftly and competently.

Thousands of Texas kids have been beaten, abused and exploited by human sex traffickers during Abbott’s time as governor. A report from the Texas Tribune in 2017 detailed horrific accounts of young children who were captured and forced into sex trafficking against their will. Abbott campaigned on the issue, claiming it was one of his “key issues,” but evidence shows resources are still limited and action has been underwhelming in helping victims or reducing crime.

This year, a court monitor’s report showed that Abbott’s office knew for months that foster children were being illegally housed in an emergency shelter cited hundreds of times for dangerous conditions — but failed to report the violation to court-appointed watchdogs tasked with monitoring the state’s foster care system.

Now, under Greg Abbott, vigilantes can be paid bounties for reporting anywoman seeking an abortion and anyone who helped her. The bounty applies to any woman who has been pregnant 6 weeks – which is usually only two weeks after a woman learns that she’s pregnant. The new Abbott-backed law provides NO exceptions for rape or incest.

Abbott also refused to sign the Lilly Ledbetter Act, which would require Texas women be paid the same amount as men for doing the same or equal work.

And despite outcries from medical professionals, school officials, and youth advocates, Abbott is putting the lives of kids, teachers, and others involved in public education at deadly risk by forbidding vaccine and mask requirements.