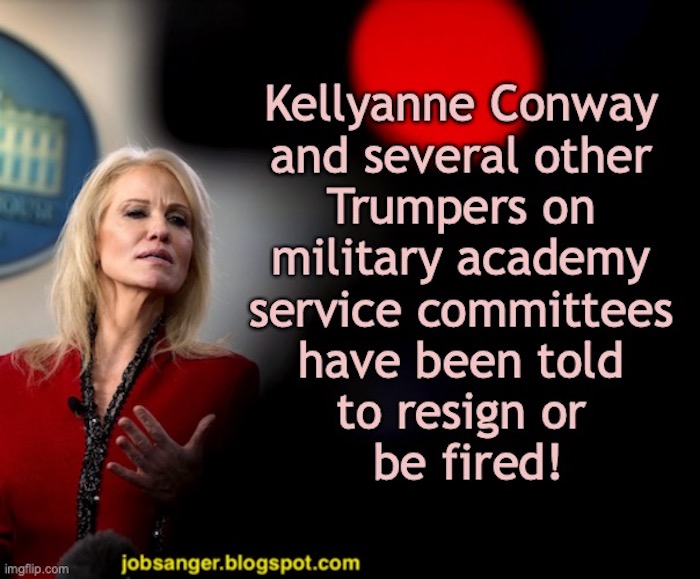 In the final weeks he was in office, Donald Trump placed his most loyal (and incompetent) liars on the service committees of the military academies. Now President Biden is getting rid of them. He has told them to resign or be fired.

Here is Hayes Brown take on this at MSNBC.com:

President Joe Biden is cleaning house. On Wednesday, the White House asked for resignations from more than 10 of former President Donald Trump's appointees to boards that advise three military service academies. It’s an unprecedented move from Biden — and absolutely the correct one.

But to hear the soon-to-be-fired board members gripe about it, you’d think Biden had overturned a core principle of American democracy. The loudest of these voices so far has been Kellyanne Conway, a former senior counselor to Trump. Conway was never in the U.S. Air Force. She has no real connection to the service — but in the closing weeks of the Trump administration, she was given a position on the Air Force Academy Board of Visitors.

She’s yet to attend a single meeting of the board: The last one was held Nov. 18. Secretary of Defense Lloyd Austin hit pause on new meetings early this year when he instituted a “zero-based review” of 40 advisory committees that provide nonbinding suggestions to the Pentagon on everything from science to military family readiness. (“Zero-based” is corporate jargon implying the review “starts from zero,” in this case making each board defend its existence and current makeup.)

Well, the results are in, and that means Conway and other Trump appointees to the boards of visitors at the Air Force Academy, U.S. Naval Academy and U.S. Military Academy at West Point are out. It’s a list that includes the likes of retired Army Col. Douglas Macgregor — who once advocated martial law at the southern U.S. border and who was most recently a senior adviser for Trump’s last acting defense secretary — and it’s a list that includes former White House press secretary and “Dancing With the Stars” fifth runner-up Sean Spicer.

The response from the Trump appointees has been particularly spicy given how many of them were unfit for the positions in the first place, with almost all of them refusing to resign. Conway posted her response letter, which accuses Biden of using the decision — which has been in the works for months — as a distraction from the deaths of U.S. service members in Afghanistan. . . .

A big deal is also being made over the potential politicization of what have traditionally been nonpartisan positions. But, in this case, these roles were filled with hyperpartisans and crackpots as a thank you from a hyperpartisan crackpot. If anything, this is a move back toward the norm, not away from it, no matter what Conway may claim.

I’m sure this won’t be the last of these announcements. My money is on former Trump campaign staffers Corey Lewandowski and David Bossie getting the boot from the Defense Business Board next. And when the time comes, I say to them the same thing I say to Conway, Spicer and Vought: good riddance.