Do GOP Leaders Care That They Are Killing Their Voters? 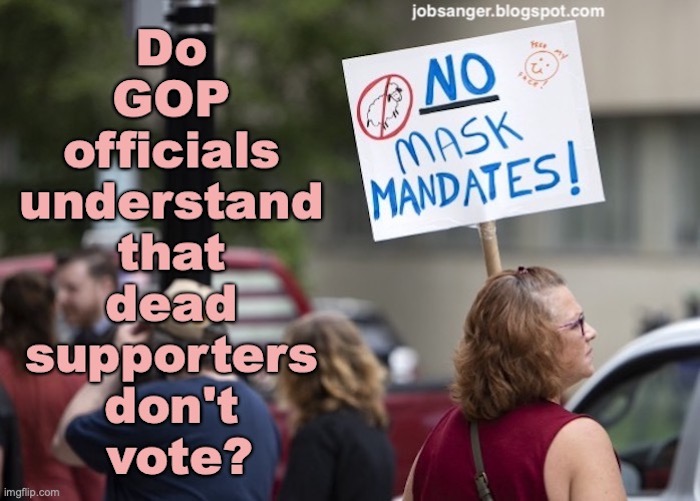 The Coronavirus continues to rage across this country -- now with even more dangerous variants. Currently, it is the unvaccinated people that are responsible for the continuing pandemic, and they make up a huge percentage (nearly all) of those who are being hospitalized and dying from the virus. And most of those unvaccinated are right-wing Republicans (especially those refusing to even wear a mask) who are following the lead of their elected officials. It makes me wonder why these politicians are killing off their own voters. Won't that come back to bite them in a close election?

Here is how Lauren Elizabeth describes this craziness at medium.com:

A few days ago, an old conservative coworker of mine who happens to be a Facebook shared an image of an anti-mask protest from a town close to where she lives, with the person who originally shared it captioning it: ‘We are here. Come join us!’. My old coworker wrote:

“I’m so beyond proud to see this! Unfortunately, due to a positive covid test..I could not attend. I’d be there in a second otherwise. I am home praying instead. I am praying for medical freedom, praying to unmask children, and praying for the families who lose their loved one’s to all this. Craig and I are home sick, but we are doing just fine thanks to the amazing people we have in our lives and God. No, we do not wish we would have got the vaccine. We are strong enough to fight this and in it together. We are kicking Covid’s ass like our bodies were designed to do! #mybody #mychoice #medicalfreedom #stopthemandate”

Not two full days later, my old coworker shared that Craig, her fiancé referenced in her post, was in the hospital. He remains seriously ill, and is — as she put it — “still not out of the woods”.

This is not a unique incident. What my coworker and her fiancé are experiencing has been happening all across the country, with covid ripping through the unvaccinated in particular and spreading at an unprecedented rate. I don’t share her story out of smugness, or to imply “I told you so”. There’s been plenty of that to go around, and as justifiably frustrated as I and many others might be with people who have made the choice that my old coworker and her fiancé made, I’m doing my best to focus my anger on those who have intentionally spread the misinformation and unintelligent talking points that my old coworker and millions of others like her have come to believe.

To appease the right wing base their leaders are letting them die, and that’s a difficult reality to process.

As much as they might fear the right wing base, GOP lawmakers, pundits, and other various prominent figures are also keenly aware of just how to use them. They know how to keep them animated. They know how to use that animation to their advantage, say, disrupting school board meetings over mask mandates to such an extent that school board members are quitting, paving the way for the right wing to run for those seats themselves. Their leaders know there is little they really have to substantively do for them, other than tell them what they want to hear even if it kills them.

The thing is, I’m not sure the GOP leadership class fully understands what they’ve started.

Right now, covid is ripping through unvaccinated conservatives at a disproportionate rate, killing hundreds, even thousands a day. Of course, their leaders do not and never have cared about the lives lost as a direct result of the propaganda they’ve spread. After all, what’s it matter to someone like Tucker Carlson when there’s money to be made if he feeds his audience what it wants to hear? But what about when it starts to affect the political chances of GOP hopefuls running for office in tight races? As infuriating and disturbing as it might sound, I’m not sure those potential GOP lawmakers would really care about it until they lose a race by 1500 votes and realize they likely lost 2000 or more voters to covid.

Granted, I think they’re beginning to catch on. Why else would Donald Trump suddenly be encouraging his base to get vaccinated, however halfheartedly?

The thing is, as was the case when Donald Trump was first really rising to prominence within the party back in 2015, I’m not sure they fully understand or are prepared to deal with the monster they have created.