Is The Senate Filibuster Constitutional? (Maybe Not!) 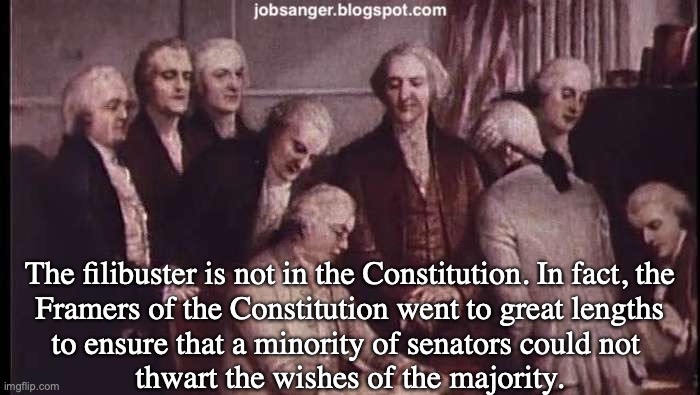 The U.S. Senate is in a virtual deadlock. That's because, while they are a minority, the Senate Republicans have enough votes to sustain a filibuster. That means they have the power to block everything (except reconciliation bills and the approval of federal judges).

One is left to wonder how it is in a democracy that the minority can block any bill by the majority. Is it even constitutional for that to happen? Former Labor Secretary Robert Reich says it is not constitutional. Here is his reasoning (from his own blog):

You’ve probably been hearing a lot about the filibuster these days. But here’s one thing about this old Senate rule you might not know: the filibuster actually violates the Constitution.

Even some so-called moderate Democrats, like Joe Manchin and Krysten Sinema, have outsized power to block crucial legislation thanks to the filibuster.

Many of those who defend the filibuster consider themselves “originalists,” who claim to be following the Constitution as the Framers intended.

But the filibuster is not in the Constitution. In fact, the Framers of the Constitution went to great lengths to ensure that a minority of senators could not thwart the wishes of the majority.

After all, a major reason they called the Constitutional Convention was that the Articles of Confederation (the precursor to the Constitution) required a super-majority vote of nine of the thirteen states, making the government weak and ineffective.

James Madison argued against any super-majority requirement, writing that “the fundamental principle of free government would be reversed,“ and “It would be no longer the majority that would rule: the power would be transferred to the minority.”

Alexander Hamilton, meanwhile, warned about “how much good may be prevented, and how much ill may be produced” if a minority in either house of Congress had “the power of hindering the doing what may be necessary.”

Hence, the Framers required no more than a simple majority vote in both houses of Congress to pass legislation. They carved out specific exceptions, requiring a super-majority vote only for rare, high-stakes decisions:

By being explicit about these exceptions where a super-majority is necessary, the Framers underscored their commitment to majority rule for the normal business of the nation.

They would have balked at the notion of a minority of senators continually obstructing the majority, which is now the case with the filibuster.

So where did the filibuster come from?

The Senate needed a mechanism to end debate on proposed laws, and move laws to a vote — a problem the Framers didn’t anticipate. In 1841, a small group of senators took full advantage of this oversight to stage the first filibuster. They hoped to hamstring the Senate and force their opponents to give in by prolonging debate and delaying a vote.

This was what became known as the “talking filibuster” as popularized in the film Mr. Smith Goes to Washington. But the results were hardly admirable.

After the Civil War, the filibuster was used by Southern politicians to defeat Reconstruction legislation, including bills to protect the voting rights of Black Americans.

In 1917, as a result of pressure from President Woodrow Wilson and the public, the Senate finally adopted a procedure for limiting debate and ending filibusters with a two-thirds vote (67 votes). In the 1970s, the Senate reduced the number of votes required to end debate down to 60, and no longer requiredconstant talking to delay a vote. 41 votes would do it.

Throughout much of the 20th century, despite all the rule changes, filibusters remained rare. Southern senators mainly used them to block anti-lynching, fair employment, voting rights, and other critical civil rights bills.

That all changed in 2006, after Democrats won a majority of Senate seats. Senate Republicans, now in the minority, used the 60-vote requirement with unprecedented frequency. After Barack Obama became president in 2008, the Republican minority blocked virtually every significant piece of legislation. Nothing could move without 60 votes.

Now we have a total mockery of majority rule. And it bears repeating that just 41 Senate Republicans, representing only 21 percent of the country, are blocking critical laws supported by the vast majority of Americans.

This is exactly the opposite of what the framers of the Constitution intended. They unequivocally rejected the notion that a minority of Senators could obstruct the majority.

Senators whose votes have been blocked by a minority should have standing to take this issue to the Supreme Court. And the Court should abolish the filibuster as violating the U.S. Constitution.