Rally For The Jan. 6th Rioters Much Smaller Than Expected 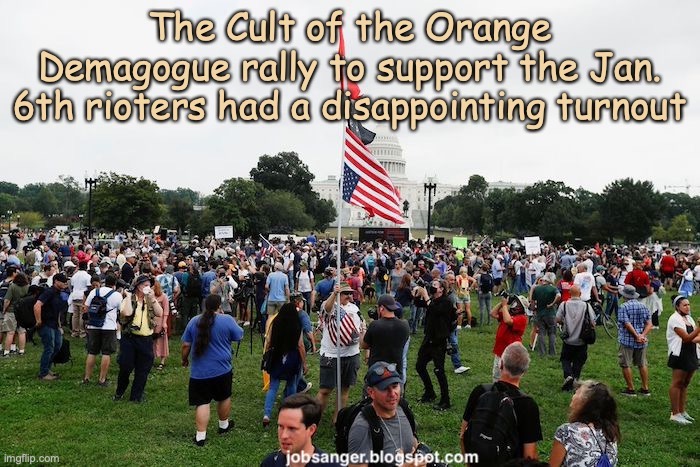 There was supposed to be a massive rally by Trump supporters in Washington yesterday. The rally was to show support for those arrested in the January 6th riots at the Capitol Building.

Police had feared another huge rally that could turn violent -- a repeat of the January 6th insurrection. They made sure they had enough resources to control a mob. But they needn't have worried. The crowd was tiny (only a couple of hundred people) -- and they were greatly outnumbered by the police present.

Some of the people attending the sparse rally carried U.S. flags, and I suspect they would all consider themselves as patriots. They are not!

I'm glad that only a few showed up, and there was no repeat of January 6th. But don't let the small size of the crowd of haters fool you. There are literally millions more who believe the same sick things.

Our nation is currently at a fork in the road. We will either cement our belief in democracy, or we will lose that democracy to the white supremacists and fascists who want an authoritarian government. The anti-democratic forces know they are a minority. That's why they are trying house violence to get what they want.

All of this is going to come to a head in the 2022 elections. We will either rise up and save our democracy by voting the Trump cult (of Republicans) out of power, or we will allow them to end our democracy.

I'm usually an optimist, and I think decent Americans will rise up and save our country. But I'm not sure. All it would take for the haters to win is for too many good people to stay at home on Election Day.