The GOP's Political Games Could Wreck The U.S. Economy 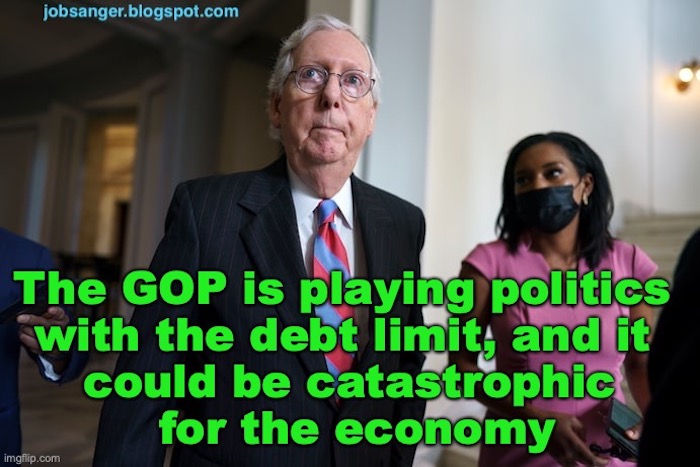 The debt limit for the U.S. government will reach its limit about the middle of October. Unless it is raised, the government will not be able to pay its bills, and the economy will suffer (affecting millions of Americans). But Mitch McConnell is saying the Republicans will vote against raising the debt limit -- ignoring the fact that they helped create the debt that must be paid. They are saying that raising the debt limit will allow Democrats to spend more in the future, but that's a lie!

Many of you may be asking yourself: what the hell is the debt ceiling? In brief, it’s the limit on how much the government is allowed to borrow to pay for what it already owes on bills Congress has already agreed on and enacted — not for legislation that’s currently being debated. If it’s not raised, the government can’t pay its bills (just as if you or I didn’t pay our credit card bill). That would result in a default, which would mean chaos. Your variable-rate mortgage, for example, would go through the roof. The full faith and credit of the United States would be undermined.

The current debt ceiling has to be raised to pay for debt racked up by Republicans as well as Democrats, including trillions under the former guy. Senate Democrats raised the ceiling for Trump, so why won’t Mitch McConnell and his Senate Republicans do it now for Biden?

The White House on Thursday instructed federal agencies to prepare for an imminent government shutdown, in case Congress fails to pass a stopgap funding bill by Sept. 30. Government shutdowns are expensive and disruptive, and they deservedly sully the nation’s image and sense of self-respect. But at this point a lapse in government services should be the least of Americans’ worries. The nation faces an epochal financial disaster if Congress fails to raise the debt limit, forcing the country to default on its obligations and inviting a global financial panic.

If that happens, there will be no doubt about who is at fault: Senate Minority Leader Mitch McConnell (R-Ky.) and his Republican caucus, who are playing games with the full faith and credit of the United States.

Democrats joined with Republicans to suspend the debt ceiling during the Trump administration. But Mr. McConnell suddenly declares that the majority is solely responsible for performing this unattractive task, even though he pioneered the routine use of the filibuster to force any and all Senate legislation to overcome a 60-vote threshold. With only 50 votes, and Republicans unwilling to lift a finger to avoid financial calamity, Democrats’ only option would be to use the arcane “reconciliation” procedure. Senate experts believe this would be possible, but it would require a couple of weeks of complex parliamentary maneuvering and some Republican cooperation in the Senate Budget Committee. Meanwhile, the treasury is on the verge of running out of money.

Other than sticking it to Democrats, what is the point? Using reconciliation, Democrats would have to raise the debt limit by a specific dollar amount, not just suspend it for a time, as Republicans did under President Donald Trump. This would enable Republicans to run attack ads blasting Democrats for expanding the debt by some large, specific number. Never mind that raising the debt limit does not approve any new spending; it merely permits the treasury to finance the spending Congress already has okayed.

For their part, Democrats do not want to jump through complex procedural hoops while they are trying to pass other big legislation, and they want the same political cover they gave Republicans during Mr. Trump’s presidency by raising the debt limit in a bipartisan fashion.

National default should be unthinkable, and the need to avoid default should not be viewed as a political opportunity. Even if Democrats manage to force through a debt limit hike this time, Mr. McConnell’s out-of-nowhere standard placing all the responsibility on the majority party will make it much harder to lift the debt ceiling going forward, and correspondingly more likely that the nation will one day walk off the cliff even if it manages to step back now.

Time’s up. It’s hard to see how anyone professing patriotism could willfully risk inflicting this kind of harm on the nation. Republicans with any sense of responsibility should band together and help pass a clean debt limit increase.