The Progressive Case For Linking The Infrastructure Bills 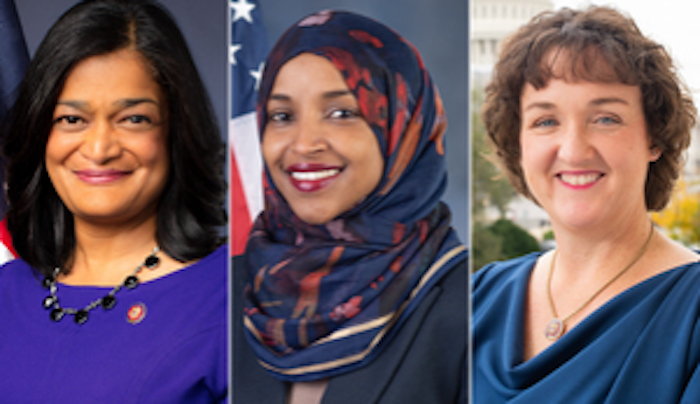 In the following op-ed (by Rep. Porter, Rep. Omar, and Rep. Jayapal), progressives make their case:

When President Joe Biden announced in the spring his plans for "once-in-a-generation investments in our nation's future," he said that "it is not enough to restore where we were prior to the pandemic. We need to build a stronger economy that does not leave anyone behind -- we need to build back better."

That is our shared vision -- the vision the American people voted for -- and it is what we as Congressional leaders must deliver with urgency.

Speaker Nancy Pelosi has announced her intention that the House vote this week on a transformative economic package and a major investment in infrastructure. Congress now faces a choice: advance the entirety of an agenda that gets American families the help they need, or deliver only a fraction of it. That's why we, as leaders of the Congressional Progressive Caucus, remain committed to voting for the infrastructure bill only after the Build Back Better Act is passed.

We lead one of the largest ideological caucuses in the US House of Representatives, and our membersrepresent a cross-section of America. From rural districts to urban, from some of the most competitive districts in the country to Democratic strongholds, our caucus is emblematic of the diversity of our party and our country.

Yet, we hear remarkable consistency in our communities' concerns.

Parents can't get back to work because they can't find affordable child care. Young people are infuriated that their country's leaders are not taking aggressive enough steps to leave them a livable planet. Families are struggling to stay healthy in dangerous, crumbling public housing. Immigrant communities are tired of living under the threat of deportation -- especially as so many are essential workers who kept our country's economy going through the pandemic at risk to their own safety. And people cannot afford the prescription drugs they need, forced to rationmedication to stay alive.

In short: Americans need the Build Back Better agenda.

This agenda was divided into two concurrent bills -- the Infrastructure Investment and Jobs Act and the Build Back Better Act. The Infrastructure Investment and Jobs Act will allow for long overdue updates to our country's roads, bridges and waterways. But it's the Build Back Better Act that will deliver the child care, climate action, affordable housing, immigration reform and lower drug prices that Americans need, deserve and voted for.

The Build Back Better Act provides child care to women who have been pushed out of the workforce. It funds free community college and affordable housing. It finally expands Medicare to cover dental, vision and hearing benefits for our seniors. And it takes meaningful action on climate change -- funding millions of green jobs to build our energy future.

Not only is this good policy, but it's also overwhelmingly popular. Voters support the Build Back Better package's provisions by a 30-point margin, according to an August Quinnipiac University poll. Funding for home-based care for seniors has 75% support across the political spectrum, a July AP/NORC survey shows, with universal pre-K and affordable housing funds both seeing 67% support. More than half of voters are in favor of the child tax credit (55%) and free community college (54%). And about 2 in 3 Americans support paying for these investments by taxing corporations and the ultra-wealthy.

From the beginning of this process, the Progressive Caucus has been clear that the infrastructure bill and the Build Back Better Act are two parts of a whole, so they must be passed together. Our call has been echoed by the President, the Speaker of the House, and the Senate Majority Leader. As Speaker Pelosi said in June, "there won't be an infrastructure bill, unless we have a reconciliation bill. Plain and simple."

Passing the Build Back Better Act will require standing up to powerful special interests. The investments it makes in improving our economy are paid for by getting billionaires and big corporations to pay their fair share of taxes; insisting to Big Pharma that we negotiate drug prices; and taking on the fossil fuel lobby to address the climate crisis.

That's why corporate lobbyists, Big Pharma, and Wall Street executives have declared all-out war to stop the bill. Rather than understanding that these are investments in our economy -- which should be its mission -- the US Chamber of Commerce has been one of the leaders in lobbyingagainst the bill with reported six-figure ad campaigns trying to block worker protections and climate action. The pharmaceutical industry, which already spent $92 million on lobbying in the first quarter of 2021 alone, launched a multimillion-dollar ad campaign to torpedo President Biden's effort to rein in drug costs. Another corporate lobbyist decried provisions to catch tax cheats as "existential threat(s)."

If we allow corporate lobbyists to dictate our legislative agenda, the economic recovery will grind to a halt.

Let us be clear: our caucus supports the Infrastructure Investment and Jobs Act. We see the harms that crumbling roads, structurally deficient bridges, and lead-poisoned water have on our communities. Updating our infrastructure is a necessary component to delivering a strong, stable economy that creates opportunity for all.

But equally necessary are the child care, elder care, health care, housing, education and climate actions currently included in the Build Back Better Act. Without both the infrastructure bill and the budget bill, our economic recovery will be slow, unstable, and weak. Millions of Americans will be left out or fall further behind.

A few conservative Democrats have suggested we should "pause" this urgently needed legislation by moving forward without the Build Back Better Act and providing less help to families. But we will not leave behind child care, paid leave, health care, housing, education, climate action, and a long-overdue road map to citizenship.

We must deliver for American families. Our Progressive Caucus members will put our votes on the line to send the entirety of the Build Back Better agenda to President Biden's desk. As he said when he laid out this plan: "We can do this. We have to do this. We will do this."

These were the priorities Democrats ran on in 2020. These were the values that allowed us to take the House, the Senate, and the White House. And by getting both the Build Back Better Act and the Infrastructure Investment and Jobs Act signed into law, we will meet the needs of the American people.