The "Religious Exemption" To COVID-19 Vaccine Is A Farce 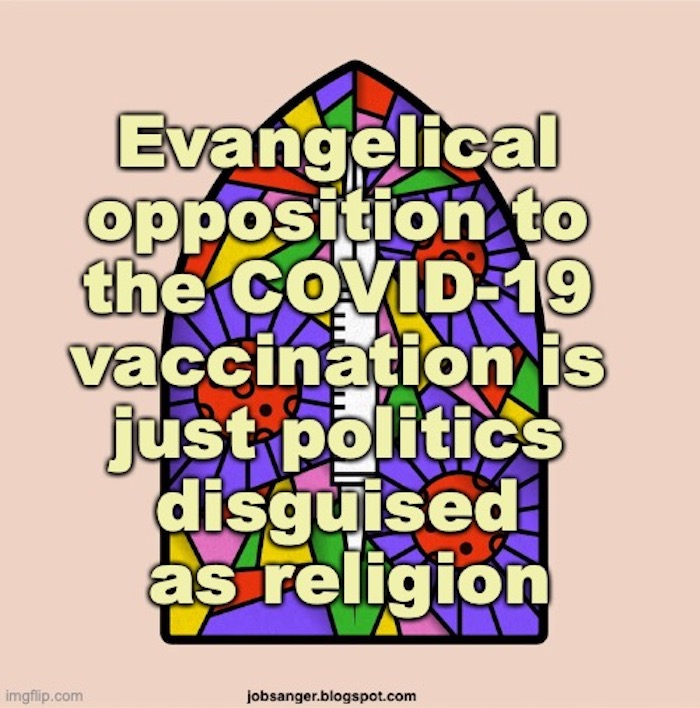 As most readers of this blog will know, I am an atheist. But I was raised in a fundamentalist / evangelical church, and I attended two religious universities to get my Bachelor's Degree -- Harding University (Church of Christ) and Texas Wesleyan University (Methodist). So, I am very familiar with christianity and the Bible.

That's why I am puzzled by so many christians (especially evangelicals) who are claiming a religious exemption to avoid taking the COVID-19 vaccine. It is not against the christian religion to get a vaccination, and many who are claiming this exemption regularly get vaccinated against other diseases. I believe this is just right-wing politics disguised as religion.

The following is part of an op-ed by Curtis Chang (a consulting faculty member at Duke Divinity School) in The New York Times:

Religious exemptions to employer mandates are a precious right in our democracy. This is why it is especially important not to offer such exemptions to coronavirus vaccine mandates. They make a mockery of Christianity and religious liberty.

Now that the Food and Drug Administration has fully approved the Pfizer-BioNTech coronavirus vaccine, government agencies, universities and businesses are instituting vaccination requirements. This has prompted a wave of requests from individuals to opt out of such requirements by claiming a religious exemption.

The legal basis of this request is Title VII of the 1964 Civil Rights Act, which requires American employers to accommodate employees’ religious beliefs. One evangelical church near Sacramento has reportedly issued more than 3,000 letters requesting exemptions, and a pastor in Brooklyn told The New York Daily News that 60 percent of his congregation has asked for them. Given that evangelicals account for a substantial portion of people refusing vaccination, especially in the Delta-ravaged Bible Belt, the road to ending the pandemic may very well now run through the religious exemption issue.

According to the Civil Rights Act, these exemptions are meant to apply to people with “sincerely held religious beliefs,” and on both counts — religious belief and sincerity — the exemption demand fails when it comes to coronavirus vaccine mandates for Christians.

First, there is no actual religious basis for exemptions from vaccine mandates in any established stream of Christianity. Within both Catholicism and all the major Protestant denominations, no creed or Scripture in any way prohibits Christians from getting the vaccine. Even the sect of Christian Scientists, which historically has abstained from medical treatment, has expressed openness to vaccines for the sake of the wider community. The consensus of mainstream Christian leaders — from Pope Francis to Franklin Graham — is that vaccination is consistent with biblical Christian faith. . . .

My plea to my fellow Christians: If you insist on refusing the vaccine, that is your right. But please do not bring God into it. Doing so is the very definition of violating the Third Commandment, “Thou shalt not take the name of the Lord thy God in vain.”. . .

Exemption requests also likely fail on the grounds of sincere belief. We naturally look for consistency of a belief as a test of sincerity; it’s common sense. We would doubt the sincerity of a receptionist who demands vegetarian options at a workplace cafeteria when he frequently eats steak at restaurants. Any institution considering religious exemptions should require applicants to demonstrate that they have consistently refused other immunizations for religious reasons.

Vaccine hesitancy has never been a core religious belief of evangelical Christians. The vast majority of evangelicals have historically chosen to be immunized against polio, measles, tetanus and other diseases. As a child, I attended evangelical summer camps that required vaccinations, and as an adult, I worked for ministries with similar mandates. Some conservative evangelicals just don’t like the political taste of this particular vaccine on the menu.

But even with legitimate religious claims sincerely held, the law allows companies to forgo offering exemptions if doing so places an “undue hardship” on the employer. Increasing the risk of bringing an infectious disease into the workplace certainly qualifies. For jobs that involve exposure to vulnerable populations, minimizing that risk via immunization is clearly an appropriate job requirement. Religious freedom for a teacher who opposes vaccines does not mean having the right to jeopardize children by being unvaccinated. Religious freedom means that if she doesn’t wish to fulfill her employer’s job requirement, she is free to find another job.

All employers should eliminate any religious exemptions for coronavirus vaccines for Christians, period. New York State has removed its religious exemption option for health care workers, and other institutions should follow suit.

Similarly, religious leaders will need to join with secular institutions in opposing exemptions. Pastors are already being inundated with requests for letters supporting exemptions. As a former pastor of an evangelical church, I know it will be difficult to say “no.” But my colleagues should do the right thing and refuse such requests. Refuse to mislead our secular neighbors. Refuse to abuse our precious religious liberty. Refuse to be complicit in putting our neighbors at risk. . . .

The vaccine effort has been plagued by falsehoods of all kinds. The religious exemption from vaccine mandates for Christians is the latest lie. All of us should stand together for the truth.