The Republicans Are A Minority Party - And They Don't Care 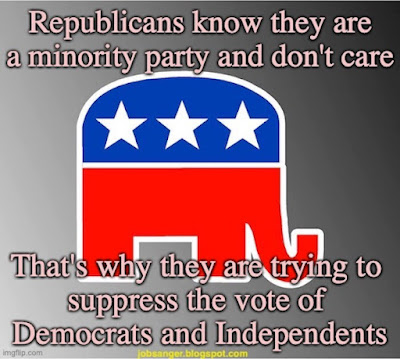 In the past, when a party realized they were not supported by most voters, they would alter some of their positions to appeal to a greater number of voters.

But that is not what the Republican Party is doing. They have doubled down on their unpopular positions, because they know those positions are liked by most of their base.

They have chosen instead to suppress the votes of Democrats and Independents. They think if they can keep the vote total low enough, then their supporters can cast a majority of votes. Are they wrong?

Here is part of an opinion piece on this by Dean Obeidallah for MSNBC.com:

A Fox News poll released last week found that 67 percent of voters support requiring teachers and students to wear masks in schools. Even in the “reddish” state of Florida, a Quinnipiac University poll last month found that 60 percent of people there favor school mask mandates. This makes great sense given that Covid-19 hospital admissions for children recently reached their highest levels since the start of the pandemic, and the American Academy of Pediatrics reported more than 240,000 pediatric Covid cases between Sept. 2 and Sept. 9.

The GOP is giving us a master class in the tyranny of the minority. Republicans across the nation are enacting polices on issues from Covid safeguards to restrictions on abortion and voting rights that are opposed by a solid majority of Americans — but are supported by the much smaller GOP base. . . .

Same goes for the new brutally oppressive GOP law in Texas that deprives women of reproductive freedom after six weeks of pregnancy — even in the case of rape or incest. The law empowers private citizens to sue anyone who helps a woman secure an abortion. A Monmouth University poll released Monday found that 70 percent of Americans oppose this central provision of the law — but only 41 percent of Republicans feel the same. That helps explain why numerous GOP-controlled states are considering enacting similar laws. . . .

This is another attempt by the GOP to impose tyranny of the minority. Sixty-two percent of Americans — per the Monmouth poll released Monday — believe Roe should remain the law of the land. But — and you knew there would be a “but” — only 37 percent of Republicans agree. Again, it’s not the views of all voters that matter to GOP elected officials; it’s only what their base wants. The rest of us are meaningless. . . .

Before Trump, American presidents at least made the effort to appear concerned with “all Americans.” President Joe Biden indicated a potential return to this when he declared in his inaugural address, “I will fight as hard for those who did not support me as for those who did.”

But today’s GOP has turned its back on that American principle, and nowhere is it more apparent than in their voter suppression efforts since Trump lost the 2020 election. A panicked GOP has already enacted 30 laws in 18 states that make it harder to cast a ballot — especially for people the GOP views as not supporting it. The Texas GOP recently banned 24-hour in-person voting after it became popular with people of color, who tend to vote Democratic.

But making it harder to vote flies in the face of what a majority of Americans want, per poll after poll. Yet again, we see the partisan divide, such as on the issue of automatic voter registration, which is supported by 61 percent of Americans but only 38 percent of Republicans, according to the Pew Research Center. This explains why Senate Minority Leader Mitch McConnell, R-Ky., recently came out against the Freedom to Vote Act, which includes instituting automatic voter registration and creating a national standard for election access.

The GOP gets that it’s a shrinking party — hence the voter suppression laws and the nonstop red meat to keep the Republican base happy at the expense of the rest of us.