Trump And His Supporters Are Losing Their "Culture War" 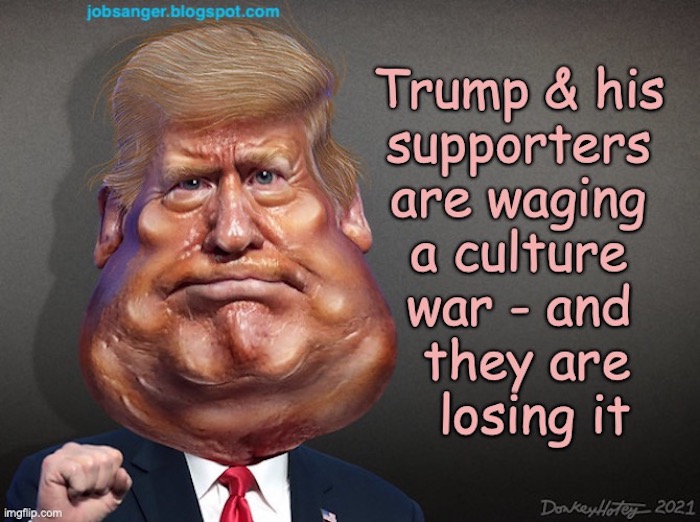 Beyond cutting taxes for himself and his rich buddies, Trump's administration can be boiled down to one thing -- an effort to send the United States back to the Fifties, when white men held all the power and other groups had few if any rights. It was an effort to appease white supremacists and evangelicals (many of which are also on the white supremacy bandwagon). In short, they are trying to wage a culture war. They are losing it, in spite of the massive coverage they get in the media.

Here is just part of an excellent article on this subject by Leonard Steinhorn in The Washington Post:

Despite being a one-term twice-impeached president who lost reelection and never won the popular vote, Trump looms as an outsize political and cultural figure in our historical imagination. Some have even described us as living in “the Trump era.”

Yet, this focus on Trump may miss the real story of our times. Media preoccupation does not signify historical consequence, and despite the breathless attention we lavish on him now, it’s wholly possible that future historians may view Trump less as a major force in our nation’s narrative and more as a sidebar whose disruption, nativism and anti-democratic impulses distracted us from the real changes underway in our country, ones driven by the very younger Americans who are in the forefront of rejecting Trump and Trumpism.

We’ve been down this path before, most notably in the 1980s when Ronald Reagan dominated U.S. politics and both journalists and scholars characterized those years as a time of conservative ascendancy. But were they?

Beginning in the 1960s, the United States seemed to move dramatically leftward on cultural issues, a change largely driven by young Americans holding different values than their Greatest Generation parents. Sixties youth were moving America from the monochromatic, religious and traditional society of the 1950s to one that would increasingly resemble the more diverse, multicultural and secular culture of today. . . .

This transformation, however, seemed to hit a wall with Reagan’s election in 1980. The press focused on the rise of religious conservatives as a major force in American politics. Reporters viewed their activation as evidence of a conservative resurgence that was repudiating the very cultural changes young Americans had fueled during the previous two decades and demanding the restoration of “traditional values” and Christianity in the public square. . . .

Rather than the restoration of traditional values, the opposite happened. Although Reagan tried to turn back the clock on civil rights, women’s rights, environmental policy and religion, it didn’t work. In every respect attitudes, values, norms, practices and expectations in these areas instead grew far more liberal than what Reagan advocated — and have become increasingly liberal since.

Rather than return to traditional gender roles and domesticity, for example, women, empowered by the feminist movement, began seizing opportunities in sports, education and business. Female-owned companies nearly tripled in the Reagan years, and by the end of the 1980s, the number of young women playing interscholastic sports increased more than sixfold from 20 years before, from less than 300,000 to nearly 2 million. Women received only 39 percent of MA degrees in 1970, but by the early 1990s it had increased to 53 percent — now it’s over 60 percent.

Attitudes and institutions followed a similar path. Despite the hostility of religious conservatives and the Reagan administration — and their callous disregard for the AIDS epidemic — support for LGBTQ Americans steadily rose throughout the 1980s; this gradual liberalization eventually produced legal and cultural acceptance of marriage equality. Colleges and universities, recognizing their responsibility to tell the nation’s story through a lens far more inclusive than ever before, diversified their curriculum and added more female and minority voices and stories to their courses and canon. The media — both entertainment and news — increasingly did the same. . . .

The age of Reagan, therefore, was actually anything but.

Something similar is happening today. Young Americans, this time millennials and Gen Z, are confronting ongoing racial, cultural, social, environmental and economic challenges that their elders have been unable to solve. And instead of rejecting liberalism, they have doubled down. Widespread disdain for Trump may have been an accelerant for their deep-rooted liberalism, but young people were moving in that direction long before he became president.

Again, if one looks beyond political rhetoric and Washington politics, the picture of this era in America is far more complex. At work, millennials and Gen Z insist that companies show — and not just express — a commitment to diversity, inclusion, equal opportunity, work-life balance and the environment. Black Lives Matter and LGBTQ equality are not just movements to them — they are unshakable values.

They demand a commitment to gender equality that will translate to equity in their personal relationships, jobs, parenting and institutions. Among Gen Z, many say that gender should no longer define people as it used to. They are also the most religiously unaffiliated generation in our history — more secular, less Christian, less likely to attend religious services, what one research organization called America’s “first truly ‘post-Christian‘ generation.” Even younger evangelicals are moving in a more liberal direction, far more protective of the environment and accepting of LGBTQ rights than their elders.

This does not mean that a path to a more liberal America is inevitable or will be friction-free. Trump’s damage to our democratic institutions could be massive especially if he and his supporters in Republican-run states continue to interfere with elections and voting rights. And his impact on the courts and fights over manufactured issues such as critical race theory and transgender athletes may delay changes, or make them more difficult to enact.

Yet, the “age of Reagan” taught us that those who shout the loudest about a world that’s passing them by may not be the ones wielding the most influence when it comes to the social and cultural metamorphosis that will reshape our lives and country in the years and decades ahead.