Was The United States Unified After The 9/11 Attack? (No!) 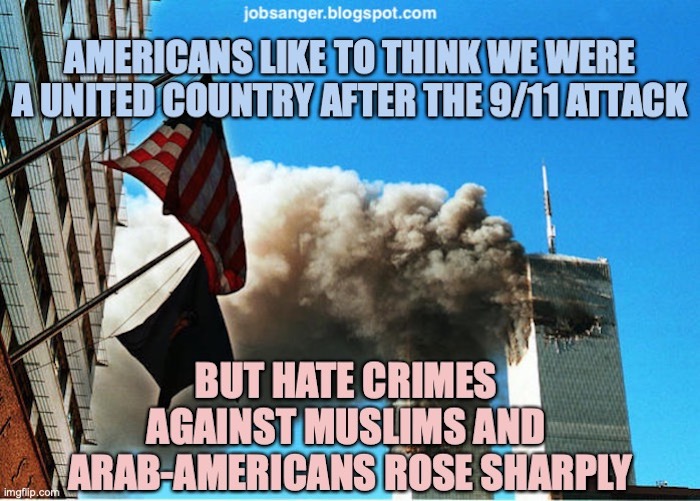 This weekend marks the 20th year since the attack on 9/11. Like most other Americans, I watched the attacks on TV, shocked and horrified at the senseless loss of life for thousands of Americans. Even now, 20 years later, I feel sad remembering. But it must be remembered, because we must not allow such a thing to be repeated.

But something else about that also makes me a bit sad. It's when the media tells us how "unified" the attacks made this country. The attacks did change things in this country, but it did not unify it.

Most of us were brought together by the horror of what we had seen. But there were those (I call them the haters) who just used it for their own sick purposes. Instead of truly coming together with the rest of us, they just subdued their normal hatreds (for a few days or weeks) so they could focus on a new/different hatred.

I am speaking about the discrimination and hate crimes directed at muslims and Arab-Americans. These incidents rose sharply. It was easy at the time to organize an anti-muslim protest, even though most muslims were good Americans (and just as horrified by the violence as the rest of us). In New York City, muslims were vilified for trying to build a civic center, and across the nation, they were targeted. It was actually a shameful period.

It comes as no surprise though. It reminds me of how "unified" the country was after the attack on Pearl Harbor -- a unity that did not include American citizens of Japanese descent (who were vilified and many lost their possessions and were actually put in camps).

The truth is that this country has never been unified. It was even unified during our War for Independence. Many (the Tories) sided with the British and fought against the soldiers of the revolution.

Today, we face another time that needs unity -- a pandemic that threatens all of our citizens. Common sense demands that we unify to fight the virus and save our country. But, as usual, the haters are there to ruin things for the rest of us. They refuse to wear masks or get vaccinations -- and their refusals have insured that the pandemic continues to thrive in spite of the efforts of most Americans.

Unity can only be built through love, respect, and acceptance. Sadly, throughout our history, there have been enough haters to prevent true unity. We have had to fight their selfish hatred to make progress in this country every step of the way, and it is likely that will be true in the future.

I would love to believe that one day we can achieve a true unity in they country (and the world), but I doubt it will happen. While most people are decent, it seems there will always be haters among -- and they will prevent unity (even if they cannot stop progress).