Democrats Are Just Being Democrats - The Bills Will Pass 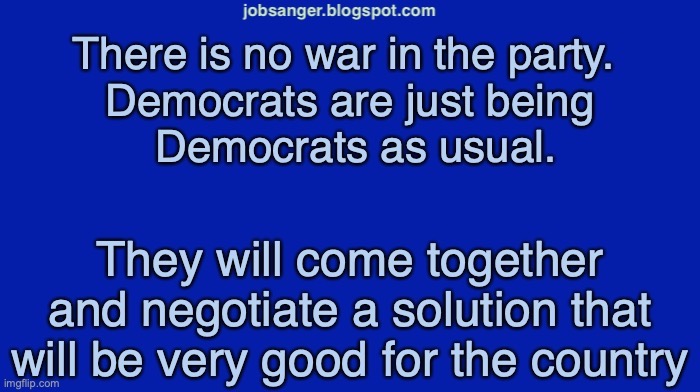 The Democratic Party is a big tent party. It has liberals, moderates, and conservatives -- and it includes people of all colors and religions (including no religion). It is natural for such a wide assortment of people to disagree -- and they do frequently. As a life-long Democrat, I remember butting heads with fellow Democrats many times -- on issues and candidates. I also remember shaking hands (or hugging) those same Democrats after a decision has been made, and working with them. That's what Democrats do.

And it's what they've always done. Decades ago, Will Rogers said he wasn't a member of any organized party -- he was a Democrat. There's some truth in that. Democrats argue, and it can look disorganized -- but they also get things done.

Republicans run people who disagree with them out of their party. Democrats don't. They fight, and then make-up -- and march together in unison.

That is what is happening now. The moderates and progressives are arguing about what should be in the Build Back Better bill, and what it should cost (and how it will be paid for). That is normality for the Democratic Party, and it is also normal for them to negotiate a solution. That negotiation is happening right now.

I believe that, because I've seen it happen time after time.