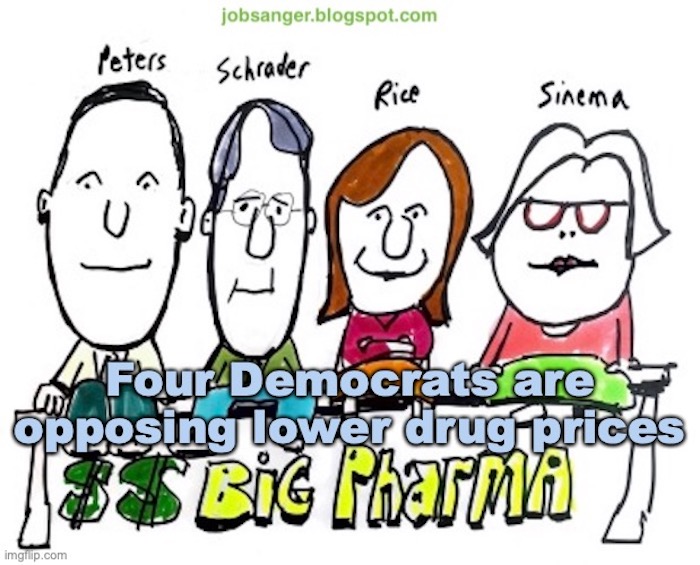 Democrats had hoped to pass a law allowing Medicare to negotiate drug prices -- a move that would likely lower drug prices for all Americans. Sadly, that is being blocked. It's being blocked by four Democrats, who have joined all Republicans in voting against the measure. All four have received big donations from Big Pharma.

Here is how former Labor Secretary Robert Reich describes this refusal of the four to help the American people get lower drug prices:

Excuse me but I have to vent.

Three House Democrats and one Democratic senator are now blocking a proposal to allow Medicare to negotiate drug prices. Medicare is such a big purchaser of drugs that it has the bargaining leverage to cut drug prices for everyone — if allowed to do so. This would save at least $450 billion over the next 10 years and significantly lower prescription drug prices.

But four Democrats are standing in the way.

Before I get to why they’re doing this, let me identify them. In the House: Scott Peters (whose district includes San Diego), Kurt Schrader (Oregon’s central coast), and Kathleen Rice (central and southern Nassau County on Long Island).

And in the Senate: Kyrsten Sinema (Arizona).

Okay, so why are these four Democrats blocking this measure?

Not because this policy is unpopular with the public. To the contrary, 88 percent of voters favor allowing the federal government to negotiate lower drug prices, including 77 percent of Republicans.

In fact, at least 90 percent of these four lawmakers’ ownconstituents support allowing Medicare to negotiate drug prices. Get this: The idea is so popular that both Kathleen Rice and Kyrsten Sinema actively campaigned on it.

And not because the pharmaceutical industry needs extra money in order to continue to generate new drugs. Taxpayers already fund much of its basic research through the National Institutes of Health. Also bear in mind that a big portion of the costs of bringing a drug to market goes into advertising and marketing — which shouldn’t even be allowed for prescription drugs (and isn’t in most other rich countries, and wasn’t in the US until Big Pharma lobbied for the law to change).

Oh, and pharmaceutical firms have been overflowing with so much cash they’ve been buying back their own shares of stock.

In other words, allowing Medicare to negotiate lower drug prices should be a no-brainer.

So what gives? The question should be who gives. Follow the money.

From 2019 to 2020, Kyrsten Sinema received over $120,000 in Big Pharma contributions, even though she’s not up for re-election until 2024. Throughout her political career, she’s taken over half a million dollars from Pharma PACs and executives. Just before Sinema officially came out publicly against allowing Medicare to negotiate drug prices, a group bankrolled by Big Pharma began running TV and digital ads and sending mailers praising her for “fighting as an independent voice.”

If you think this was a coincidence, I have a bridge in Brooklyn to sell you.

Scott Peters, meanwhile, happens to be the House’s single biggest recipient of Big Pharma campaign cash in the 2022 election cycle so far. Since being elected in 2012, Peters has socked away over $860,000 from Big Pharma. The day after his letter to House Speaker Nancy Pelosi opposing using Medicare to negotiate lower drug prices was published in May 2021, Peters began receiving thousands of donations from executives at pharmaceutical companies and the industry’s powerful lobbying group.

Kurt Schrader has raked in nearly $615,000 from Big Pharma since taking office in 2008. This election cycle he’s already got $24,500 from Pharma PACS, the second most of any industry donating to him. One of former his top aides left his office earlier this year and is now lobbying for Big Pharma. According to ethics disclosures, the former aide’s lobbying efforts focus on … guess what? Drug pricing.

The third House Democrat, Kathleen Rice, has received over $84,000 from Big Pharma.

The grand total of Big Pharma cash going to these four lawmakers: over $2 million. When you consider the billions that Big Pharma will rake in for keeping drug prices high, this is a small potatoes for them. You might even call it a great investment.

But it’s a huge cost for the rest of us.

The measure isn’t being blocked solely because these four Democrats oppose it. No Republican members of Congress are in support.

But it does seem odd that Democrats would stand in the way of this sort of reform, rebuffing their own president and party — and rejecting the overwhelming preference of voters, including their own constituents — to tank a policy that they themselves campaigned on. I mean, what’s the Democratic Party for if it won’t reduce drug prices for average people? Why were these four Democrats elected in the first place?

Sometimes I worry that pointing out this sort of corruption (and it is a form of corruption) will make people even more cynical than they already are about American politics, resulting in a kind of fatalism or resignation that causes many to give up — and thereby cede the entirety of our democracy to the moneyed interests. My hope is just the opposite: that when people hear about this sort of thing, they’re outraged enough to become even more politically active.

In my experience spanning fifty years of American politics — from interning for Senator Bobby Kennedy in 1967 to serving as secretary of labor in the Clinton administration to advising President Obama — most of the elected lawmakers I’ve dealt with sincerely want to do the right thing. Some don’t feel they can do the right thing if they want to be reelected, and confuse means and ends. A very few are on the take.

What can you do? For one thing, contact your members of Congress and tell them that the first step in getting big money out of politics is to support the Freedom to Vote Act. (You might put in an extra call to Joe Manchin’s office and say you expect him to deliver 10 Republican senators’ votes for this bill — which he helped author — or else agree to reform the filibuster to let voting rights bills be enacted with a bare majority.)

Here’s something else you can do: If you happen to be a constituent of one of these four Democrats, don’t vote for them when they’re up for reelection. Make sure they’re primaried, and then vote in the Democratic primaries for true public servants — who care more about advancing the public good than protecting private profits.