In Rich Nation, All Citizens "Entitled" To Economic Fairness 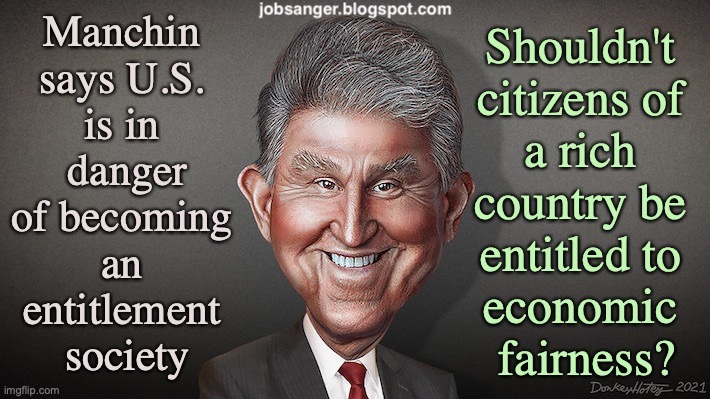 In the negotiation on the Build Back Better bill, Manchin is sticking to his cap of only $1.5 trillion over 10 years. And he's starting to sound more and more like a right-wing politician. Now he says the United States is in danger of becoming an "entitlement society", like that would be a bad thing. But in a nation as rich as the U.S., aren't all citizens entitled to economic fairness? Should the rich be the only people to benefit from our economy?

Here is some of what Zeeshan Aleem says about Manchin's position at MSNBC.com:

Democratic Sen. Joe Manchin of West Virginia has mostly been cagey about what he wants trimmed from President Joe Biden’s sweeping Build Back Better Act. One of just two Democrats holding up the bill in the Senate, he’s said he wants to shave $2 trillion off the reform package that could seal much of Biden’s policy legacy, yet he has offered little in the way of specifics.

But according to a recent Axios report, Manchin has finally at least made a broad gesture toward how Democrats might go about cuts: He said they must choose only one of three major policies in the bill intended to help families — the expanded child tax credit, paid family medical leave or subsidies for child care. The other two should be killed. . . .

It also seems to dovetail with his recent criticism that America is at risk of becoming an “entitlement society” should it pass too much social spending meant to assist households economically. The subtext of his demand is that America can’t remain America if people feel they have rights to services like child care.

All of that is a shame. All these policies are not just worth demanding as rights, but they also make for smart economic policy.

Manchin has fixated on aggressively shrinking the top-line figure, as if there’s something inherently menacing to the economy about passing a $3.5 trillion bill. But to describe it as self-indulgence is odd: The bill would involve spending just 1.2 percent of our projected national income over the next 10 years on a range of social policiesthat would help reduce the size of the many holes in our social safety net, and much of it would be financed through taxes on corporations and the rich. In turn, that would allow for more participation in the workforce and increased economic productivity.

As a number of Nobel Prize-winning economists, including former chief economist for the World Bank Joseph Stiglitz, have pointed out, concerns from Manchin and some centrists and conservatives that the package could cause unmanageable debt and inflation are not well-founded. It would do the opposite. "Because this agenda invests in long-term economic capacity and will enhance the ability of more Americans to participate productively in the economy, it will ease longer-term inflationary pressures," they wrote in an open letter in September. . . .

Amidst a tense back-and-forth with Sen. Bernie Sanders, I-Vt., over the bill, Manchin this week saidhe thinks this bill could tilt the U.S. away from being “a compassionate, rewarding society” and toward becoming an “entitlement society.”

That’s a backward way of thinking about these matters. The U.S. is a major outlier among affluent nations in how little it spends on providing social services for families. Most advanced capitalist nations spend far more on social services including child care, child allowances and paid family leave, and these are not societies racked by slothfulness and inefficiency. Instead, many have seen the benefits of policies such as robust family paid leave have a small impact on employers, level the playing field, improve child development and boost long-term economic growth.

Manchin fears the idea of Americans feeling “entitled” to certain arrangements with the government when it comes to child care. But talk of entitlement is often a loaded buzzword wielded by conservatives to undermine a concept that’s very dear to Americans: rights. In this country, we constantly talk about rights tied to civil liberties such as freedom of speech or freedom from warrantless searches. In a country as affluent as America, it seems quite sensible to extend discussion of rights to the economic sphere as well. . . .

In a democratic country with extraordinary wealth distributed extremely unequally like ours, it is reasonable to demand that every child has access to the resources and care needed to start a good life.

Democrats should not back off of Manchin’s entitlement fear-mongering. Instead we should be asking him: What’s wrong with believing that every child has a right to a decent life?