Judges Are Making Decisions Affecting Stocks They Own 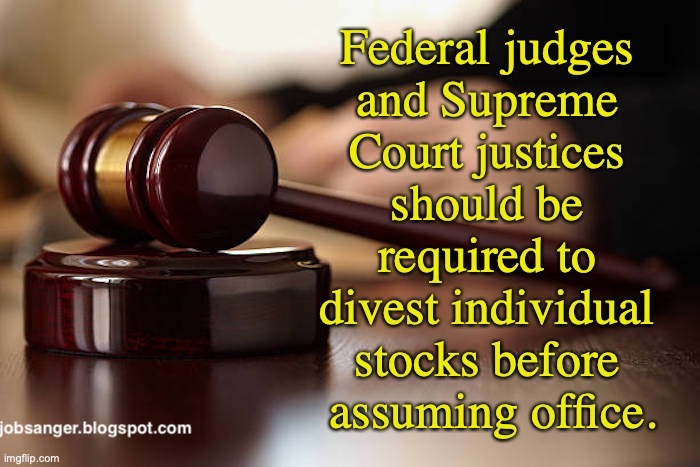 We hear about presidents (like Trump) and members of Congress that own stocks, and make regulations or laws that affect those stocks (making themselves richer). It's not supposed to happen, but the laws governing it are too weak to effectively prevent it. There is a bill in Congress (the protecting Democracy Act) that would help curb these abuses.

But there is a branch of our federal government that won't be covered in that law -- the judiciary. And they are also sometimes doing the same thing -- making decisions that affect stocks they own. This needs to be stopped. In fact, all federal judges and Supreme Court justices should be required to divest themselves of any individual stocks before being allowed to assume office.

Here is part of what Richard W. Painter has to say about this at MSNBC.com:

In recent years, the United States has experienced an unprecedented number of financial conflicts of interest in its executive and legislative branches. Thanks to recent reporting by The Wall Street Journal, we now know how bad financial conflicts of interest are in the federal judiciary. According to the newspaper’s report, 131 federal judges broke the law by participating in 685 cases in which they had a financial interest, chiefly because of their holdings in individual stocks. This is a violation of the disqualification statute for United States judges prohibiting them from deciding cases in which they have a financial interest.

We have an ethical crisis across all three branches of government because those holding high office have been unwilling to divest from assets that conflict with their official duties. . . .

The 131 federal judges mentioned in the Wall Street Journal report, judges holding stocks in companies affected by cases before them are required to recuse themselves. It’s likely that some judges aren’t watching their portfolios or their spouses’ portfolios or aren’t aware that many larger publicly traded companies have multiple subsidiaries. The identify of those subsidiaries is unknown to the many investors (judges included) who don’t read the parent company’s annual report. Other judges simply may not care about complying with a statute that requires recusal.

This problem could easily be avoided if judges, like most Americans who invest for their retirement, invested in the “mutual or common investment funds” that are specifically exempt from the conflicts of interest provisions under federal law. It is unlikely that a single case would affect the value of an entire fund. For whatever reason — perhaps the belief that they can beat the market because they have more information than professional fund managers — some judges, like some members of Congress, insist on owning, and sometimes actively trading, individual stocks.

Some judges may think that, when the occasion arises, they can sell a stock so they can participate in a case. Not so fast. If the judge has any inside information from the court about how the case might come out, selling the stock while in possession of that information could expose the judge to prosecution under federal criminal insider trading laws. The judge who has a conflict of interest in a case may be stuck with a stock by the time the conflict is noticeable.

Matters get worse on the Supreme Court. At least three justices — Chief Justice John Roberts and Associate Justices Stephen Breyer and Samuel Alito — own individual stocks, and all three have recused themselves from cases because of their stock holdings. The problem is, unlike on the lower federal courts, there are no replacement justices to take their place. A case could be decided by eight justices or seven justices because of recusals. This is problematic for the Supreme Court, which often grants review in certain cases not just to resolve a particular dispute but to clearly state what the law is going forward. A Supreme Court decision that does not have the support of at least five justices has little value as a precedent because the ruling could be reversed in a future case in which none of the justices recuse themselves.

This is also a problem that could be easily solved if justices were to invest the same way most Americans invest their retirement funds — in broadly diversified mutual funds. . . .

Last month, Congress introduced the Protecting Our Democracy Actto curb abuses in the executive branch. The bill, among other things, provides for enforcement of the Emoluments Clause of the Constitution by the Department of Justice and Congress. Never again should concerned citizens have to wait four years, as we did in the CREW litigation, while a president openly flouts the financial conflicts of interest laws. . . .

The Protecting Our Democracy Act also needs to include a provision requiring presidents, vice presidents, members of Congress and all federal judges to divest from individual stocks and any other investments that pose conflicts of interest with their official duties. House and Senate leadership may not like such a divestment mandate, perhaps because they also own individual stocks, but they need to do it anyway. Investments in broadly diversified mutual funds are good enough for most individual investors, and they should be good enough for federal officers at the pinnacle of all three branches of our government.

Virtually every other federal employee is prohibited by criminal statutes from participating in matters in which they have a conflict of interest. Holders of the highest federal offices — executive, legislative or judicial — should be required to do the same.