Should The Treasury Mint A Platinum Trillion Dollar Coin? 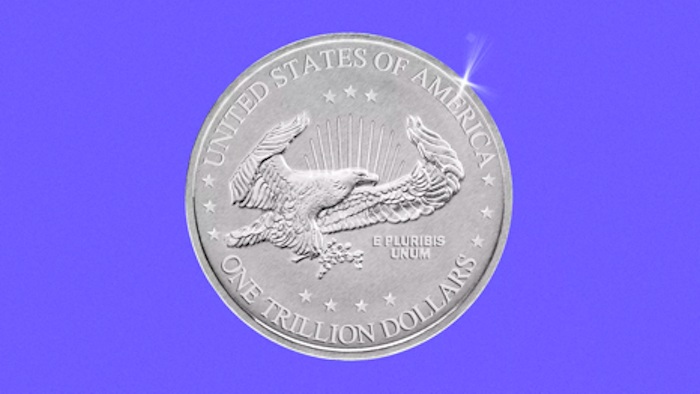 The Republicans in Congress are currently refusing to raise the government's debt limit, and they are doing it for purely political reasons. They know that defaulting on the government's debt would be disastrous for the economy, but they want to blame Democrats for increasing the national debt -- even though raising the debt limit would not allow any new debt. It would just let the government pay the debt it already has (much of it created by the Republicans). They are hoping Americans are too stupid to know that.

Some have proposed a unique and radical work-around for avoiding default if the debt limit is not raised. They think the government should mint a trillion dollar platinum coin, and use that to pay off existing debt.

Here is just part of what Nobel-winning economist Paul Krugman has to say about that idea:

The Biden administration should mint a $1 trillion platinum coin or declare that the Constitution gives it the right to issue whatever debt is needed to fund the government — or use some other trick I haven’t thought of to ignore the looming crisis.

Some background: We all learned in civics class — do students still take civics? — that federal policy on spending and taxing is set by a straightforward legislative process. Congress passes bills and if the president doesn’t veto those bills, they become law. End of story.

But there is, it turns out, a quirk in the budget process: Congress must also separately authorize the federal government to take on more debt.

Historically, this was considered a mere technicality: Of course Congress would approve borrowing if the spending and taxing bills it had already enacted led to a budget deficit. Not doing so would make no sense — not just because it would cripple government operations, but also because it would threaten financial havoc: U.S. government securities are the bedrock of the global financial system, used for collateral in many transactions. Threatening federal cash flows could therefore provoke a worldwide meltdown.

But U.S. politics aren’t what they once were. The Republican Party has become both radical and ruthless; let’s not forget that most G.O.P. legislators refused to certify President Biden’s election. And while this radicalized party cheerfully authorizes trillions in borrowing whenever it holds the White House, it weaponizes the debt limit whenever a Democrat is president. . . .

Republicans are using the filibuster to block an increase in the debt ceiling with only weeks to go before we hit a wall and default on payments — and they aren’t even making specific demands. They simply don’t want to share any responsibility for governing. . . .

So what does this have to do with platinum coins? Well, there’s a strange provision in U.S. law that empowers the Treasury secretary to mint and issue platinum coins in any quantity and denomination she chooses. Presumably the purpose of this provision was to allow the creation of coins celebrating people or events. But the language doesn’t say that. So on the face of it, Janet Yellen could mint a platinum coin with a face value of $1 trillion — no, it needn’t include $1 trillion worth of platinum — deposit it at the Federal Reserve and draw on that account to keep paying the government’s bills without borrowing. . . .

Look, the reason we’re in this situation is that Republicans have learned a terrible truth: Voters don’t know or care about process; they only react to how things are going. The G.O.P. believes that it can benefit from outright, naked sabotage; Democrats shouldn’t worry about undoing that sabotage through whatever tricks they can deploy.

Of course, if the Biden administration does do something unusual to avoid a debt crisis, Republicans will run blistering ads denouncing the action. But they’ll do that anyway! . . .

The Republican faux-outrage dial is already turned up to 11; how much worse can it get?

So go ahead, Democrats, and do whatever it takes to get through this. Gimmickry in the defense of sanity — and, in an important sense, democracy — is no vice.