The Time For Action On Global Climate Change Is NOW! 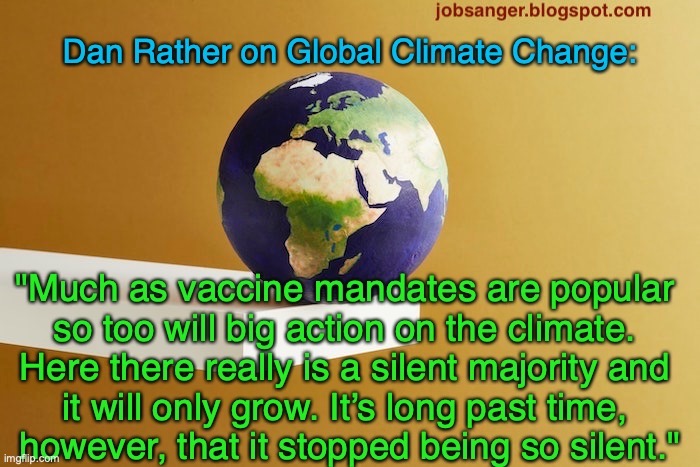 If we had taken action a couple of decades ago, the global climate change could have been prevented. But we didn't. Too many people seemed to think we had plenty of time, and action could be deferred. But the change has been faster than predicted, and is already causing serious damage to the planet and those who live on it. Now, all we can do is mitigate the damage that climate change will cause -- if we act now!

Sadly, the GOP is still trying to block any action, and some Democrats are helping them. The Build Back Better plan proposed by President Biden contained some serious action to move the country toward clean energy, but now it looks like the clean energy action will be cut out of the proposal. This is because Senator Manchin (who owns millions in stocks of fossil fuel companies) opposes it.

It's time for the majority to speak up and demand action be taken NOW!

The following is part of an article on this by journalist Dan Rather:

Senator Manchin deserves all the scrutiny he is getting. Reporters should try to follow the money and dig into his strong connections to coal and other fossil fuel interests. But I suspect he will not ever budge. And furthermore, all fair coverage should also state at the top of the story that the entire Republican caucus stands with him in opposition to meaningful action on the climate crisis. A few years ago, I would marvel at how this one issue could generate such complete disregard, and indeed contempt, for scientific consensus. But with the pandemic we see the rot on that score is far more pervasive.

I think that for younger readers it might be difficult to see how much has changed on this issue, even as the kind of meaningful action we need remains maddingly elusive. When I was a child growing up in Houston, it was a small city with aspirations of greatness. Its path to wealth would be paved with oil, a business that employed my father even during the dark days of the Great Depression. We had no idea that something we pulled from the ground could be so destructive. Rather we saw it as the means for breathtaking progress. Cars went from a luxury to an accessible part of daily life. We could move in ways we hadn’t before. We could power light during darkness. We saw fossil fuels we as the foundation for modernity.

All the while, as we burned oil, gas, and coal, we saw what could be accomplished with energy. It helped us defeat the Nazis. It propelled us into space. It brought higher standards of living to the far corners of the globe. We were not immune to its dirtiness. We could see the polluted air, the oil spills, the coal mines. But like much of the early environmental movement, the focus was almost exclusively on local and regional pollution - a lake, a shoreline, or the air trapped in a valley.

As scientists began to sound the alarm with increased frequency and fear, the issue of our climate did migrate more firmly into the center of our political consciousness as well. But even for people who really understood it and cared about it, it had a way of hovering in the middle level of lists of concern. So we dithered, stalled, and took half measures. Cynical actors framed the issue as the environment on one side and our economy on the other, without enough people understanding the fate of the two would become increasingly intertwined. The echoes of what we have seen with the pandemic in this regard, and others, are chilling.

What is so frustrating is that we already know where this story will go. The climate will get worse. The deadly impacts, already being felt all around the world, will increase. The younger generation, already more revved up for action, will replace those who rose to power during the age of inaction. And eventually we will act to stem damage that was avoidable if we had acted earlier. There will be a time when we will not get energy from fossil fuels. There will be no other choice. The choice of how to do it and how fast is the one for our moment (and the moments already past). But our political system, mired in stasis, is blinking once again.

It is easy to write about the climate and play the notes of despair. This is not being cynical; there is bad news everywhere. But like the pandemic, there can be reasons for hope. Science is giving us remarkable tools to fight this. The costs of alternative energy are plummeting. We will continue to innovate in how we make and use energy. We can learn about remediation efforts, the role of forests to capture carbon, and new hi-tech tools. More and more people will go into fields looking to undo the damage. With all the activity and money that will flow into the field, there will be new inventions that we cannot predict. In the meantime, we can prioritize local and state action. And most importantly we can elevate climate change to be at the top of our agenda.

I believe it can be a rallying cry for voters. I didn’t believe that in the past. But as the issue becomes worse, the salience of it as a reason to vote will increase. The energy (no pun intended) I see around fighting climate change has become palpable. As we deal with storms and fires and heat waves, as we see greater flooding and droughts, I suspect we will see more demands made at the ballot box. I don’t think the political class fully understands how quickly this can become an explosive issue. Much as vaccine mandates are popular so too will big action on the climate. Here there really is a silent majority and it will only grow. It’s long past time, however, that it stopped being so silent.