The Ways Biden's BBB Plan Could Be Paid For 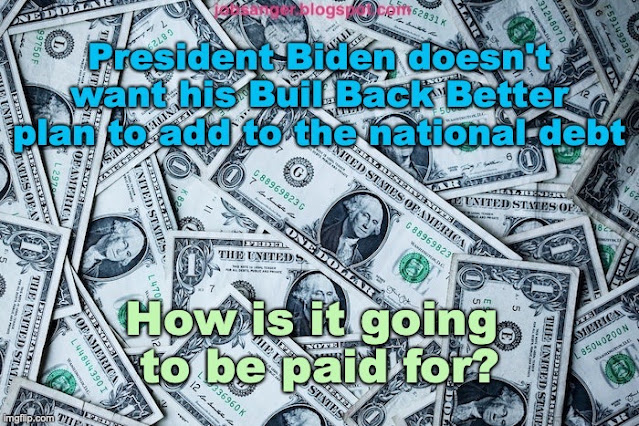 It now looks like President Biden's Build Back Better plan will cost about $1.9 to $2.0 trillion dollars. But the president doesn't want to do what the Republicans did with their tax cuts for corporations and the rich -- add trillions to the national debt. He want the program to be paid for. It hasn't been decided how that will happen. That is still being negotiated. But Hayes Brown at MSNBC.com tells us the ways that are being discussed:

Tax rate changes for the wealthy and corporations

The House Ways and Means Committee in September passed its budget reconciliation recommendations, which featured a series of tax increases to help pay the package. That included increasing the top marginal tax rate for earners over $400,000 to 39.6 percent; raising the corporate tax rate from 21 to 26.5 percent; and boosting taxes on capital gains from 20 percent to 25 percent. The corporate tax hike alone would bring in $540 billion in revenue over the next 10 years. The income and capital gains tax changes would add another $300 billion or so.

Because of some last-minute opposition (which I’ll get into later), the tax hikes that passed Ways and Means might not be available in the final bill. An alternative option under consideration sets a 15 percent minimum tax that corporations have to pay. “Because this minimum tax would be tied to the amount of revenue reported, corporations could not use tax deductions to zero out their obligations to the IRS,” the Washington Post reported.

Relatedly, multinational corporations can currently dodge many U.S. taxes through holding onto its profits in countries with lower taxes. But more than 130 nations recently agreed to set a minimum tax rate of 15 percent on all corporations’ profits. That includes the United States, which has already included the provision in the Build Back Better Act. The new minimum will both stop the “race to the bottom” between countries slashing corporate rates and disincentivize American corporations from seeking out tax havens.

Wealthy Americans tend to have more complicated taxes — which makes it easier for them to avoid paying them. In the Ways and Means Committee’s legislation, the IRS would get $78.9 billion over the next 10 years for “strengthening tax enforcement activities and increasing voluntary compliance, expanding audits and other enforcement activities.” The bill’s language makes clear who’s being targeted here: “no use of these funds is intended to increase taxes on any taxpayer with taxable income below $400,000.”

The newest option in play in the Senate is a less intense version of the wealth tax that Sen. Elizabeth Warren, D-Mass., has long championed:

Under the “Billionaire Income Tax” proposal, a summary of which was obtained by The Washington Post, the federal government would require billionaires to pay taxes on the increased value of their assets such as stocks on an annual basis, regardless of whether they sell those assets. Billionaires would also be able to take deductions for the annual loss in value of those assets.

It would also set up a system for taxing assets that are not easily tradable, like real estate. The tax would apply to billionaires and people earning over $100 million in income three years in a row.