Unvaccinated Nurses/Police Pose A Danger To The Public 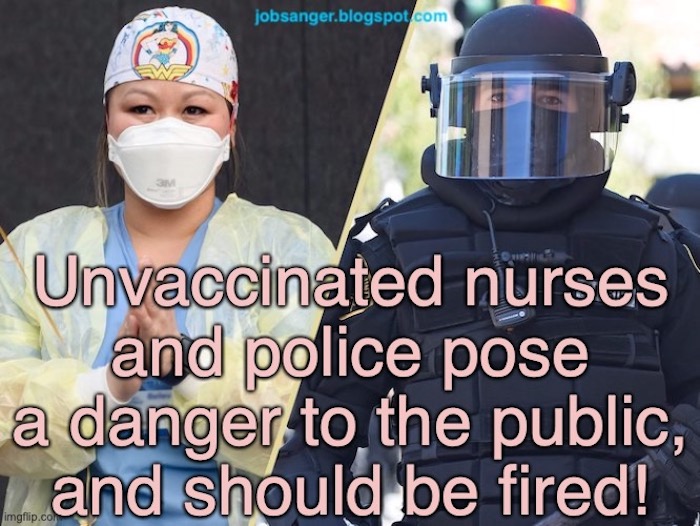 It has been mandated that public service workers, especially medical workers and police officers, should be vaccinated to protect the members of the public they come into contact with. Some are refusing. They claim it violates their rights. It doesn't! The public doesn't have a choice -- when they need the police or medical personnel, they don't have the ability to know whether those personnel are a danger to them. The public has a right to know they are safe around these individuals when they need them. Any of them who refuse to be vaccinated should be fired!

Here is part of Hayes Brown's comments on this at MSNBC.com:

Call me crazy, but I think public servants should first and foremost serve the public. That’s not to say they deserve fewer individual rights than others, but it is to say they should understand the trade-off between those rights and the rights of the public whose interests they were put in place to protect.

That includes people who are employed by law enforcement, military and health care services, all of whom have, over the last year and a half, been heralded in some circles as vital first responders who have helped keep society running throughout the pandemic. This is why I’ve had very little patience with people in these fields who have refused to get Covid-19 vaccinations. The issue for them, unlike for some who are still hesitant, isn’t a lack of access. Neither is it about a lack of information.

Instead, they’ve had early access to the vaccines, ample opportunity to be educated about their safety and more than enough time to figure out that it’s in their communities’ best interests that they be vaccinated. Which is why recent reports of police officers’ and health care staffers’ losing their jobs because they choose to remain unvaccinated sound entirely appropriate to me. . . .

All in all, there really doesn’t appear to be a mass movement of people choosing to leave their jobs over vaccinations. And we’re seeing, both anecdotally and through the data, that mandates move the needle on getting more people protected against Covid-19. And yet across the country, police departments and their unions have spent the last year refusing to accept vaccination mandates.

The people who are in those careers have entered fields in which their employment is conditioned on their willingness to put the safety of their communities first. If they now find that they are unwilling to do so by helping contain a deadly pandemic? Then, frankly, they have been in the wrong line of work this whole time.