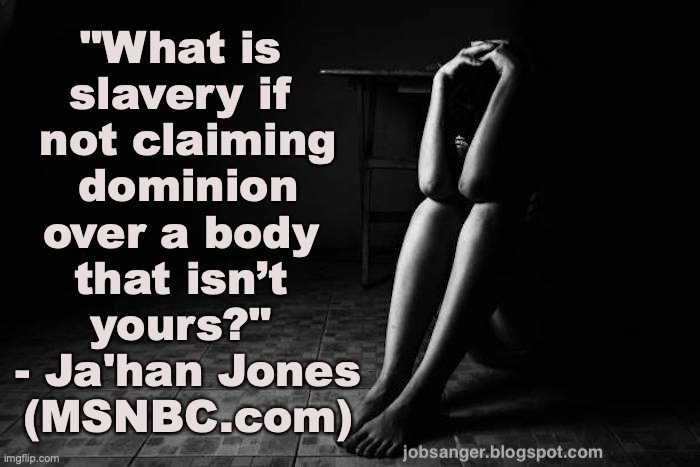 The following thought-provoking post is by Ja'han Jones at MSNBC.com:

The debate over abortion is plagued by euphemisms that favor the anti-abortion movement.

The most obvious example of this is the term “pro-life,” the nonsensical term anti-abortion activists have adopted to sanitize their stance against bodily autonomy. But today, with abortion rights being rescinded across the country, it’s more important than ever that we call restrictions on this vital procedure what they actually are: slavery.

What is slavery if not claiming dominion over a body that isn’t yours? And in this case, right-wing lawmakers are claiming ownership over the bodies of pregnant people because they claim to have a vested interest in the babies those bodies can produce. It is literally forced labor.

And fortunately, I’m far from the only person making this connection. In an article for Ms. magazine last month, lawyer Carrie Baker explained the brutal enslavement that is forced birth:

Even though largely uncompensated in the United States, pregnancy, labor and childbirth are still work. Surrogates receive tens of thousands of dollars for this work. Regardless of compensation or not, the work of gestating and birthing a child is an intimate, invasive, grueling form of labor. When undertaken willingly, childbearing can be a labor of love. But when states force this labor on a woman, the government is imposing a form of involuntary servitude prohibited by the 13th Amendment.

The 13th Amendment bars slavery or indentured servitude “except as punishment for a crime,” and states are clearly violating it by forcing women into unwanted pregnancies.

Planned Parenthood CEO Alexis McGill Johnson made a similar link during an interview with MSNBC’s Andrea Mitchell just this week, saying states barring women from traveling to undergo abortions “hearkens back to slavery.” That was a reference to fugitive slave laws, which predated the 13th Amendment and mandated that enslaved people who escaped be returned to the people who owned them.

Texas and Oklahoma already have constitutionally dubious laws on the books prohibiting women from leaving the state to get abortions, and more GOP-led states are expected to introduce similar laws.

Writing for The Nation about a similar proposal in Missouri, legal scholar Elie Mystal also drew ties between abortion laws and fugitive slave laws. In a post published in March, he said these states “are borrowing traces of the sadistic logic and psychological tactics of this country’s enslavers."

"They’re trying to intimidate and demoralize people, until those people give up on trying to break free," he wrote.

It should come as no surprise that the Confederate-obsessed GOP is trying to mimic the social environment its violently anti-American forefathers created before the Civil War. But when Republicans pass policies in pursuit of that goal, it’s incumbent on all of us to name it what it is: slavery revisited.