A Message From Martin Sheen 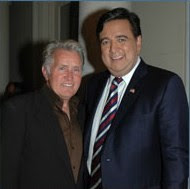 Last week, Barack Obama enlisted the help of Oprah Winfrey in his campaign for the presidency. But he's not the only candidate with a little star-power on his side. Movie star and political activist Martin Sheen has joined the Bill Richardson campaign. The following is a message from Sheen in support of Richardson:

There comes an instant in every movement when people of conscience must act.
For those of us who believe America absolutely needs Bill Richardson as our next President, that instant is RIGHT NOW!
That's why I'm getting on a plane to go to Iowa and campaign for him. I'm ready to do whatever is needed to help him win. I'll speak at rallies ... shake hands ... knock on doors ... or, if it'll help, I'll even drive the campaign bus!
Other campaigns have approached me about supporting their candidates, but I believe Bill Richardson is our best hope for healing the nation. I also think he's our best hope for winning the White House from the Republicans.
Because if we nominate the wrong candidate and the Republicans win again, America will continue its dark spiral under the influence of the Far Right.
I follow politics very closely and I see the steady movement toward Bill Richardson in Iowa and New Hampshire. He has the momentum and the message -- and I believe the growing number of pundits who are calling for a "Bill Richardson surprise" in Iowa and New Hampshire have it right.
And after the criminal presidency of George Bush, WE CANNOT AFFORD TO GET THIS ELECTION WRONG!
George Bush will leave his successor with a war that is bleeding our country dry and making us the world's pariah. He'll leave a health care system that is in shambles. And he'll leave an environmental crisis he has ignored in favor of Big Oil profits.
Bill Richardson is the only candidate with the experience and the vision to lead in the midst of these challenges.
That's why I endorse him to be the next President of the United States and why I intend to support his candidacy right through the primaries.
I'm somebody who believes that if you support a cause or a candidate passionately, you have to give it your all. I hope you feel the same way.
Because right now ... today ... this instant -- is Bill Richardson's chosen hour.
And those of us who believe ... must act.
Please help.
Martin Sheen
Posted by Ted McLaughlin at 12:01 AM