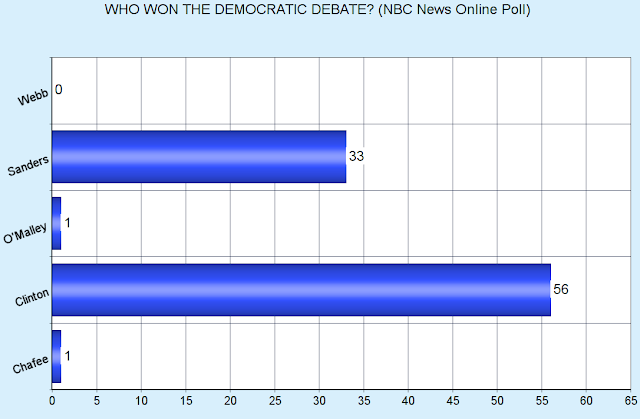 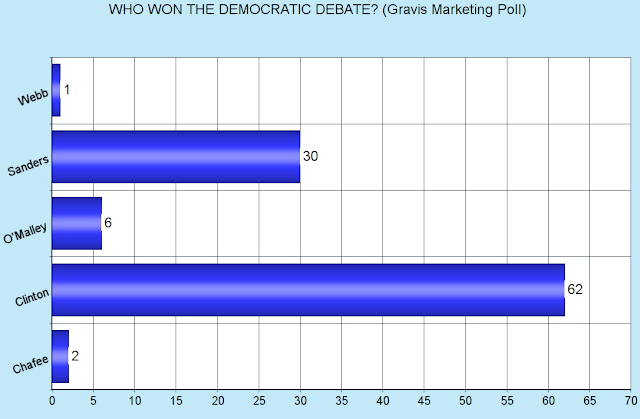 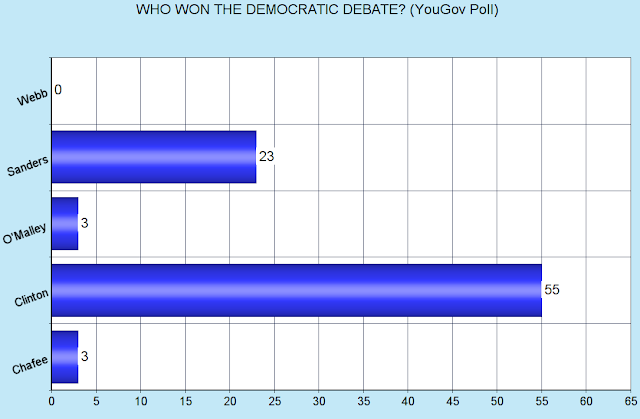 Immediately after last Tuesday's Democratic debate, several news sites let their readers vote on who won the debate. The polls were NOT scientific because they did not truly represent the feelings of all Democrats. They were for entertainment value only, and could be easily skewed by the enthusiastic supporters of a candidate -- which is exactly what happened. Supporters of Bernie Sanders flooded those polls -- and then tried to use those skewed results to claim their candidate won the debate.

I didn't post any of those entertainment polls on this blog, because I have too much respect for real polls -- scientifically done to represent the true feeling of a particular group (at a point in time). But now we have the results of three scientifically-done polls -- and I am happy to bring you their results (see the 3 charts above).

As I suspected, these polls show a far different result than the entertainment polls conducted on debate night. They show that while Sanders supporters do believe their candidate won the debate, the feeling by all Democrats (a majority of them) is that Hillary Clinton was the clear winner. The three polls show that is the feeling of from 55% to 62% of Democrats -- a margin of from 23 to 32 points over those who believe Sanders won.

The NBC News Poll was done between October 13th and 15th of a national sample of 1,857 registered Democrats, and has a margin of error of 3.2 points.

The Gravis Marketing Poll was done after the debate of a random sample of 760 registered Democrats, and has a margin of error of 3.6 points.

The YouGov Poll was done on October 14th and 15th of a random national sample of 217 Democrats. The margin of error for the whole 1,000 adults poll sample was 4.1 points, but no margin of error was given fro only Democrats.
Posted by Ted McLaughlin at 12:06 AM