Sanders Has Spent More Money Campaigning Than Others 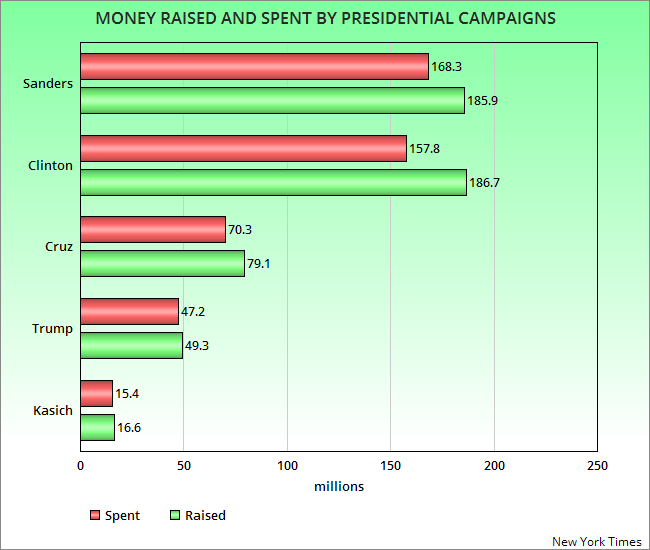 Ask any Bernie Sanders supporter and they'll tell you that Bernie has received the most money in small donations directly to his campaign than Hillary Clinton (donations directly to a campaign cannot exceed $2700). It is not true. Both candidates have received an almost equal amount donated directly to their campaign -- with Clinton receiving slightly more ($186.7 million to $185.9 million. And more than 90% of that money donated to both the Clinton and Sanders campaigns was in amounts of less than $200.

So both the Democratic campaigns have millions of small donors contributing to them -- and both have received much more money from individuals donating directly to their campaigns than any of the Republican candidates -- with Cruz receiving $79.1 million, Trump receiving $$49.3, and Kasich receiving $16.6 million.

But while Sanders hasn't raised quite as much as Clinton is direct contributions, he has spent more -- about $10.5 million more ($157.8 million for Clinton to $168.3 million for Sanders). And both Democrats have spent more than any of their Republican opponents -- probably because they had raised a lot more money.

It seems that individual donors prefer Democrats (both Clinton and Sanders) over Republicans. But don't feel sorry for the Republicans. Once their nominee is final, you can expect many millions in dark money to be spent supporting their candidate -- corporate money, given in secret.
Posted by Ted McLaughlin at 12:06 AM