Should Democrats Worry About Non-Support From Sanders ? 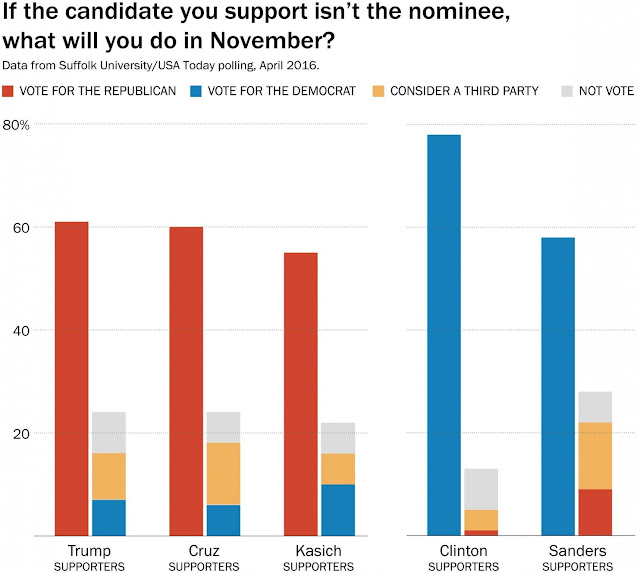 The chart above is from The Washington Post concerning a new USA Today / Suffolk University Poll. It shows that currently only about 6 in 10 Sanders supporters say they would vote for Hillary Clinton if she wins the Democratic nomination. The others say they will vote for the GOP candidate, vote third party, or just stay at home. This has many Democrats worried -- and adding to that worry is the fact that Sanders seems to be recently saying that his support will depend on how much he can get from Clinton regarding the platform she will run on.

Should Democrats be worried about this? Would a "sore loser" intransigence from Sanders hurt Democrat's chance to win the White House? I say NO. Here are several reasons why I don't think this is worth worrying about.

2. Despite what Sanders and his supporters claim, he and Clinton agree on most issues. There is very little chance the Democratic convention will come up with a platform that Sanders couldn't support.

3. This same thing was feared in 2008, when many supporters of Hillary Clinton said they would not vote for Barack Obama. It was about the same 40%. That didn't happen. When November rolled around, most of them came to their senses and realized they must vote to keep a Republican out of the White House. The same thing will happen this year.

4. Even if Sanders broke his promise to support the Democratic nominee (which I don't think he will), the Democrats have another powerful weapon to bring progressives on board -- Elizabeth Warren. The Massachusetts senator is perhaps even more popular with the progressive element in the Democratic Party than Bernie Sanders -- and was their first choice of candidates they wanted to run. Warren has been neutral during the primary season, but that will end once a nominee is chosen. She will fully support, and work hard for the Democratic nominee (Clinton) -- and she will bring most progressives back into the fold.

Will a few Sanders supporters vote third party or stay home in November? Probably. But it won't be enough to matter for the reasons I give above. It's not worth worrying about.
Posted by Ted McLaughlin at 12:04 AM