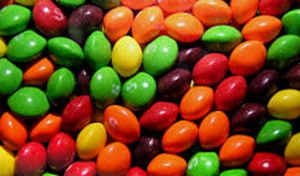 Most of us have heard the old saying called the "five second rule", which states that if food dropped on the floor is picked up within 5 seconds then it is still edible. Personally, I always thought this was just a joke. It seemed obvious that food dropped on the floor would instantly be unsanitary.
But it looks like the rule may actually be true! Assistant biology professor Anne Bernhard of Connecticut College, and two of her students decided to test the "five second rule", and see if there was anything to it.
They chose a wet food (apple slices) and a dry food (Skittles candy). They dropped these foods on a well-trod cafeteria floor for varying times from 5 seconds to five minutes. They then put the dropped foods into petri dishes to see if any bacteria grew. They were surprised at the results.
It seems the wet foods remained germ free for at least 30 seconds, and the dry foods were germ-free for up to five minutes. Not only is the "five second rule" true, we could probably change it to a "thirty second rule".
We live and learn.
Posted by Ted McLaughlin at 7:44 AM