Katie Awards Were Also Rigged In 2004 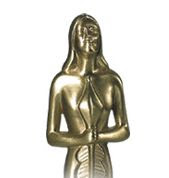 For nearly 48 years, the Katie Awards ejoyed a prestigious reputation. When a news-person or organization received a Katie (pictured above), it was considered an honor and something to include on a resume. It gave you bragging rights among your peers in Texas, Colorado, Oklahoma, Arkansas, New Mexico and Louisiana.
But that was before Elizabeth Albanese, past president of the Dallas Press Club, became involved. A few weeks ago, the Dallas Press Club announced that Albanese had rigged the awards in 2005 and 2006. They said the awards had not been impartially judged, but instead Albanese just gave them to who she wanted, including several for herself.
Now the story gets even worse. The Dallas Press Club admitted Wednesday that the 2004 awards had also been rigged. They have been unable to find any evidence that impartial judges had determined the winners.
The awards were already critically wounded. This latest revelation may have put the final nail in the coffin. When asked if there will be awards in 2007, current club president Tom Stewart said, "My opinion is that would be highly unlikely."
Maybe the awards will be resurrected in the future. I hope so. But it will take many years to regain the prestige that Albanese destroyed.
Posted by Ted McLaughlin at 7:33 AM