Panhandle To Get Largest Wind Farm In Nation 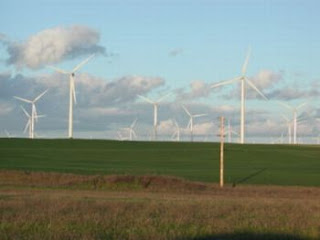 A few days ago, we learned that a proposed wind farm to generate electricity in the Gulf of Mexico will not be built. The proposed builders said they had determined that the plan was just not economically viable. But just the opposite conclusion has been reached in the Texas Panhandle.
Oilman T. Boone Pickens and his Mesa Group have spent the last 9 months investigating the feasibility of a huge wind farm in the Panhandle. They believe the renewable energy wind farm is viable, and they're planning to build what would be the largest wind farm in the nation.
Yesterday, Mesa Group met with 250 landowners in Gray, Hemphill, Roberts and Wheeler counties to explain the proposal. Mesa is offering the landowners a $4500 payment for each wind turbine, plus 4-5% of the electricity's value as it is sold. Mesa claims these are among the most generous terms in the wind farm industry.
The group wants to put about 2000 turbines across nearly 200,000 acres of Panhandle land. These turbines would produce between 2000 and 4000 megawatts of electricity (the equivalent of 1-2 nuclear power plants the size of Comanche Peak).
Mesa says it will cost about $6 billion to build. This would include the cost of building transmission lines to connect it to the state's power grid. Most of the expense is the cost to build and maintain the system. The fuel to power the system (wind) is both free and renewable. Even better is that it produces no pollution or greenhouse gases.
I know there will probably be opponents to the plan, but I think it's a good idea. It will be a financial boon to the landowners and the Panhandle in general. It will supply a lot of the much-needed electricity Texas needs as its population continues to grow. And it will do it without polluting the clean air of West Texas.
Sounds like a win-win situation to me.
Posted by Ted McLaughlin at 7:24 AM