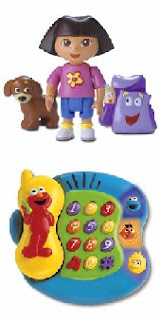 Recently, the Mattel Corporation has had to recall millions of children's toys because they had been painted with lead-based paint (which has long been known to be hazardous to children). The toys were outsourced to Chinese companies so Mattel could save a few pennies on the cost of construction of the toys.

Since the recall, there has been much discussion over whether Mattel or the Chinese companies are to blame. Personally, I think each must shoulder a large part of the blame. But there is a third party that must also accept its share of the blame -- the Bush Administration.
Since taking power, the Bush administration has done everything in its power to make things easy for the large corporations, including relaxing government regulations and inspections. With proper safety inspections in place, the Chinese and the Mattel Corporation would not have been able to dump the poisonous toys on the American market.
According to safety advocates, the Bush administration has worked against product safety in two ways:
1. It has stalled efforts to provide for more rigorous inspections.
2. It has changed the focus of the Consumer Product Safety Commission from protecting the consumer to making things easier for the corporations.
The Bush administration believes that regulations are bad and cost corporations too much. And if there's one thing that Bush has been, it is a friend to corporate America -- even at the expense of workers and consumers.
For too many years, the Republicans have been pushing to allow corporations to outsource American jobs, so corporate bigwigs can reap windfall profits. The K-Street lobbyists have seen to it that the Republicans were well-paid for this effort.
But now we are beginning to see the real costs of this corporate outsourcing. Not only are American workers being put out of work, but the American consumer is being put in danger. American workers and consumers are paying a high price for corporate windfall profits.
It is time to rein the corporations in. If they want to have their products built in another country, then they should pay a stiff tariff to provide for safety inspections and worker retraining. The American public should not have to subsidize corporate wrongdoing.
Posted by Ted McLaughlin at 12:02 AM