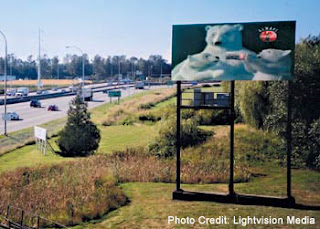 This is not good news. It seems that TxDOT officials are considering allowing new electronic advertising on billboards along our freeways. They say they would not allow the new billboards on rural roads, and that cities would have to approve any new billboards within their city limits.
They claim the billboards would be safe, because they would allow it to change only every 8 seconds, and the change must be complete within 2 seconds. They said they would not allow any constantly moving pictures.
I have my doubts as to whether a billboard that changes every 8 seconds would be safe. There are enough bad drivers on our roads already, and I suspect that this would be a distraction for many. Do we really need to take the chance on making our roads even less safe than they already are?
Of course, I understand how it might be hard for TxDOT to say no to the signs. They've put up enough of the big black monstrosities themselves. And the Republicans running our state government don't seem to have the ability to say no to any kind of business venture, no matter how bad an idea it is.
But even if the new billboards are safe, do we really want a bunch of huge new signs cluttering our roadways? I thought we had settled this back in 1965 with the Highway Beautification Act. Didn't that act limit the number of billboards allowed on our roadsides? This is just a bad idea. It would make our cities and freeways (and tollways) much uglier places. It is a failing of our modern society that we feel the need to slap an advertisement on any blank space.
It's simply wrong that only weeks after Lady Bird Johnson's death, the Republicans want to start cluttering up our landscape again.
Posted by Ted McLaughlin at 12:04 AM