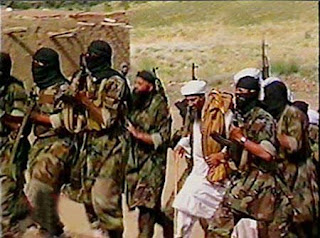 It has been common for Republicans to accuse Democrats, liberals, peace activists and anyone else who disagreed with them with aiding the terrorists. Of course, none of the accusations were true. But that didn't stop the Republicans from making the absurd accusations in an effort to shore up their own crumbling political fortunes.
That's why I was surprised to read about the REPUBLICAN that was arrested for aiding the terrorists. But he was not just a Republican. He was a former two-term Republican member of the United States House of Representatives (from 1981-1987). He was also appointed by Ronald Reagan to serve as a delegate to the United Nations in 1987.
So this was not someone who just identified himself as a Republican. This was a bonafide Reagan-Republican. A member of the conservative Republican establishment.
Yesterday, Michigan Republican, Mark Deli Siljander was indicted on federal charges of money laundering, conspiracy and obstructing justice. The money laundering and conspiracy charges spring from his helping an Islamic charity that was funneling money to terrorists, including $130,000 to an al-Queda terrorist who has threatened American troops in Afghanistan.
The obstructing justice charge came from his lying to federal authorities investigating the charity. Siljander denied he had been hired to lobby for the charity. The truth was that he had been paid $50,000 to lobby for the group. Even worse, the money used to pay him turned out to be stolen from the U.S. Agency for International Development.
Who could have guessed that when the Republicans talked about politicians aiding the terrorists, they were actually talking about one of their own? Is there anybody these guys won't take money from?
Posted by Ted McLaughlin at 12:02 AM