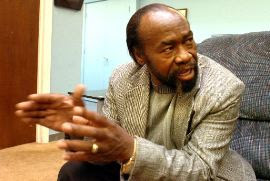 I generally don't have much of a bone to pick with the Amarillo City Commission. They do a pretty good job, and I especially like their efforts to revitalize the downtown area. But they let a small group of citizens scare them into doing a rather stupid thing last Tuesday.
The Aware Program, headed by Allen Graves (pictured above), is a non-profit organization that does a lot of good in the Amarillo area. They do HIV counseling and testing, drug and alcohol counseling, operate a small food bank, run a GED program, and have a program to help juvenile offenders. They offer these services free of charge.
I know Allen and his excellent staff because they work with some of my clients. They are dedicated and competent people, who are willing to work long hours and go the extra mile to make sure their job is done right.
The program was trying to establish a live-in program which would house parolees and probationers who were being released from drug treatment (both prison and community-based programs). They would offer drug, emotional and job counseling to the clients and provide round-the-clock supervision.
The program is badly needed in the Amarillo area, which has very little in the way of aftercare programs. They had been promised a substantial grant from the Texas Department of Criminal Justice (around $400,000), and all they needed was the approval of the city commission.
The situation seemed simple to those of us who understood the situation. These clients are going to come back to this area. They could come back under supervision and receive counseling and help, or they could be dumped back on our streets. The choice was a no-brainer.
But a small group of citizens thought they had a third choice. They decided that if the program was rejected, these clients wouldn't come back and they wouldn't have to deal with them. They convinced the city commission that this was a valid option, and the commission voted against the program. The problem is that this third choice is a false option -- it doesn't really exist, except in the tiny minds of the citizens group.
Rejecting the rehab program doesn't mean the clients won't come back here. They are from this area, and they're coming back whether the citizens and the city commission like it or not. Only now, they're going to come back without treatment, without counseling, without job training, and without supervision.
It doesn't take a genius to see that this makes our city a more dangerous place, not a less dangerous one. I don't think the commission meant to make Amarillo a more dangerous place, but that's what they did. They let a group of small-minded people convince them that it would be better to dump released criminals on the street rather than provide services for them.
I am disappointed in the city commission. They could have helped some people and prevented some future crimes. They chose not to.
Posted by Ted McLaughlin at 12:02 AM