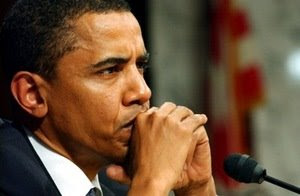 Things have really changed since the start of the Democratic presidential campaign. Last January, Clinton held a 20 point lead over Obama in the Gallup Daily Tracking Poll among Democrats. But then Iowa caucused and the Clinton slide began.
Even though Clinton has done well recently in selected states, the daily poll shows that in the country as a whole she has been running about 11 points behind Obama. That Obama lead has now been stretched to 16 points. In the latest poll, Obama has 55% to Clinton's 39% among the nation's Democrats.
Clinton may not believe the race is over, but it looks like the country's Democrats are starting to coalesce behind Obama.
Posted by Ted McLaughlin at 12:03 AM

Email ThisBlogThis!Share to TwitterShare to FacebookShare to Pinterest
Labels: 2008 campaign